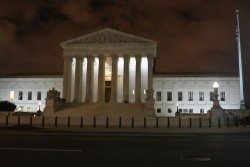 Unfortunately, the United States Supreme Court just utterly decimated the federal Fourth Amendment, especially for those who are often targeted for law enforcement stops as Justice Sonia Sotomayor explained in her dissent: “This case allows the police to stop you on the street, demand your identification, and check it for outstanding traffic warrants — even if you are doing nothing wrong.”

The chilling effect of Utah v. Strieff, No. 14-1373, will be felt harshest by those that are frequently stopped unnecessarily by law enforcement, namely people of color, and low-income people, regardless of color. Of course, most bad political decisions unfairly harm the poor and communities of color, so we shouldn’t be surprised. However, to those that live under the constant threat of police encounters, it is hard to find a case that would do as much damage as the ruling in Utah v. Strieff completely excuses unlawful law enforcement stops.

As The New York Times describes the facts of the case:

A police officer, Douglas Fackrell, stopped Edward Strieff after he had left the house based on what the state later conceded were insufficient grounds, making the stop unlawful.

Officer Fackrell then ran a check and discovered a warrant for a minor traffic violation. He arrested Mr. Strieff, searched him and found a baggie containing methamphetamines and drug paraphernalia. The question for the justices was whether the drugs must be suppressed given the unlawful stop or whether they could be used as evidence given the arrest warrant.

By ruling that the evidence gained from an illegal traffic stop may be used, the United States Supreme Court just gave carte blanche to police forces all across the country, including those with troubling histories, such as those in Ferguson Missouri, and Oakland, California, to stop anyone they want and run their name for existing warrants. Of course, people of color, will be more likely to be stopped, and people battling poverty will be more likely to have outstanding parking tickets that they haven’t been able to pay.

Justice Sonia Sotomayor penned an epic dissent that describes the dangers of this terrible ruling:

“For generations, black and brown parents have given their children ‘the talk’ — instructing them never to run down the street; always keep your hands where they can be seen; do not even think of talking back to a stranger — all out of fear of how an officer with a gun will react to them. See, e.g., W.E.B. Du Bois, The Souls of Black Folk (1903); J. Baldwin, The Fire Next Time (1963); T. Coates, Between the World and Me (2015).

“By legitimizing the conduct that produces this double consciousness, this case tells everyone, white and black, guilty and innocent, that an officer can verify your legal status at any time. It says that your body is subject to invasion while courts excuse the violation of your rights. It implies that you are not a citizen of a democracy but the subject of a carceral state, just waiting to be cataloged.

“We must not pretend that the countless people who are routinely targeted by police are ‘isolated.’ They are the canaries in the coal mine whose deaths, civil and literal, warn us that no one can breathe in this atmosphere. They are the ones who recognize that unlawful police stops corrode all our civil liberties and threaten all our lives. Until their voices matter too, our justice system will continue to be anything but.”

While the Strieff case dealt with a baggie of meth, this tarnishing of the Fourth Amendment will fall hardest on the cannabis community, the most used illicit substance in the world. Civil libertarians often warn of slippery slope decisions, but it is hard to see how this case doesn’t lead to more and more unjust law enforcement encounters, and most tragically, more lethal police encounters.