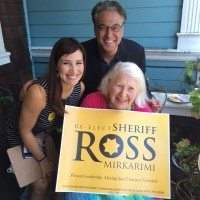 San Francisco politics is not for the faint of heart. Sheriff Ross Mirkarimi’s tenure has been no exception. Sheriff Mirkarimi has fought off scandal after scandal after scandal. Yet, he has held to his long time progressive values, and persevered to serve his constituents. With the San Francisco elections on November 3, 2015, and with a progressive vs. moderate battle in full swing in the City, with its own scandals and controversies regard Google busses, gentrification from Twitter and other tech businesses, it could be that the future of San Francisco is riding on his campaign.
However, Mirkarimi has some political allies – enter the marijuana industry. Bay Area reform advocate, Debby Goldsberry, has joined his team, along with Dan Lind, a long time UFCW organizer, now retired, who was one the founders of their cannabis division. Goldsberry and Lind hope that a substantial amount of fundraising resources can be sourced from the cannabis crowd. You might ask, why would supporters of marijuana and drug policy reform be supporting the top cop of SF? Well, it just so happens that Sheriff Mirkarimi has some of the most progressive views in the country on drug policy and prison reform.
“It is imperative that the cannabis community steps up to assure that the State’s most cannabis friendly sheriff stays in office,” Goldsberry says. “As a member of San Francisco’s Board of Supervisors, he helped implement medical cannabis regulations that are replicated nationwide, and as sheriff, he has consistently spoken out against wasting money enforcing outdated cannabis laws. People need to get involved and donate to the campaign, to make sure we step forward, not back, in San Francisco.”
Goldsberry is seemingly correct in her assessment. Sheriff Mirkarimi’s record shows a drastic reduction in arrests, drug prosecutions and jail time.
To get more information or to donate to the campaign, check out Ross for Sheriff at http://www.reelectrossforsheriff.com/about-ross.