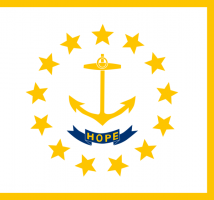 WEST GREENWICH, Rhode Island – Two leaders of a cannabis-focused religion were arrested by Rhode Island State Police for cultivation and possession of marijuana. Anne Armstrong and Alan Gordon are leaders of The Healing Church, a religion that promotes the use of cannabis as the “kaneh-bosm” referred to in the Bible’s recipe for holy anointing oil. The pair made headlines in 2015 when they attempted to smoke sacramental cannabis in Rhode Island’s Roger Williams Memorial, a site recognizing religious freedom. State police say they recovered 12 pounds of useable marijuana, 59 cannabis plants, 10 pounds of hash oil from the pair’s home. While Armstrong and Gordon cite the Constitution’s First Amendment and the Religious Freedom Restoration Act of 1993 as protecting their right to use cannabis sacramentally, just as it protects other religions’ use of hallucinogenics like peyote and ayahuasca, numerous court decisions have found in favor of the government’s compelling interest to maintain cannabis prohibition, including a decision last month by the US Ninth Circuit Court of Appeals in the marijuana distribution case of Roger Christie of The Hawaii Cannabis Ministry.

BALTIMORE, Maryland – Eugene Monroe, the NFL offensive tackle who was dropped by the Baltimore Ravens following his call for medical marijuana acceptance in the sport, has retired from football. The seven-year veteran cited his health and his family in making his decision, from his wife being “concerned about things like me putting my phone in the freezer and then tearing up our house looking for it,” to his four-year-old daughter telling him, “Daddy you don’t remember anything!” Monroe says he will still be a “vocal advocate for medical marijuana research, particularly as it relates to CTE,” the brain-damaging disease seemingly caused by repeated concussions. Monroe also says he “won’t rest” until “steps [are] taken to curb the overuse of opioids in NFL locker room.”

DUBLIN, Ireland – A lawmaker in the lower house of Parliament has introduced a bill to legalize medical marijuana in Ireland. Deputy Bríd Smith met with caregivers for people with Dravet Syndrome, the rare childhood epilepsy that moved many US states into passing CBD-only legislation. Smith, however, also supports the use of whole plant cannabis for alleviation of seizures, spasms, nausea, and pain.

GRESHAM, Oregon – The Oregon State Police have reported to Portland’s FOX TV affiliate that there have been a 163 percent increase in stoned driving arrests in the first six months of marijuana legalization. Overall DUI arrests increased by 7 percent, suggesting that marijuana is not being substituted for the use of alcohol when it comes to driving impairment factors. Oregon state traffic data for 2014 also show an increase in the overall driving fatality rate of over ten percent. However, critics note that following the passage of marijuana legalization, police are prioritizing the detection of marijuana-impaired drivers and are increasing their own education on how to spot such drivers. Driving fatalities, they counter, are influenced by alcohol DUIs, which increased, as well as lower gas prices leading to more miles traveled.

ROCHESTER, New York – A candidate for state assembly is calling for the legalization of marijuana in New York by noting that many of the citizens she visits are smoking it. Rachel Barnhart, running in the 138th District, told WHAM-TV that while campaigning door-to-door, “I meet many people who are smoking marijuana. I know what’s going on in their houses because I can smell it.” Barnhart faces an uphill battle if she wins her election to an Assembly that barely managed to pass medical marijuana in New York, and then only in a non-smokable form in a very restricted program. About half of Rochester-area residents surveyed agreed with legalization, but current assemblyman for the 138th District, Harry Bronson, said that “the constituents I represent have not been calling for the legalization, so I am not prepared to start advocating for that.”

WESTFIELD, New Jersey – An American judoka who was expelled from the 2012 Olympic Team for failing a marijuana drug test will be back competing in judo at the 2016 Olympics in Rio. Nicholas Delpopolo claims he had eaten a brownie at a friend’s party that he did not know was infused with cannabis. Following his expulsion, Delpopolo faced criticism from friends and strangers alike, to the point of people approaching him in public to curse him out. Sponsors had backed out of their support for Delpopolo as well, forcing him to take odd jobs to continue his training in judo five hours a day.