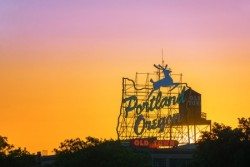 The Portland City Council met yesterday to discuss a proposed ordinance to require all medical marijuana dispensaries in the city to be located more than 1,000 feet from recreational pot shops and vice versa, but tabled the discussion after objections from activists in the marijuana reform community who claimed the ordinance creates more problems and solves nothing.

The current rules keep dispensaries 1,000 feet from each other, as well as schools and other sensitive locations. Rules also forbid soon-to-be pot shops from being 1,000 feet of each other. But there was nothing stopping a medical marijuana dispensary from being located adjacent to a recreational pot shop.

Portland Mercury reported the ordinance was requested by lobbyists representing the existing medical marijuana dispensaries, who fear losing out on the transition to becoming lucrative recreational shops if someone were to open a competing new recreational shop nearby. These dispensary operators feel that they pioneered the legal marijuana market and should be given preference as it adds recreational consumers.

Activist Lindsey Rinehart was at the meeting to testify against the ordinance and tells Marijuana Politics that the council put off the decision on the ordinance until next week’s meeting.

Other activists pointed to the unintended consequences such an ordinance would provoke. Given that medical marijuana dispensaries number over 100 in Portland, the best-trafficked locations that comport with the 1,000’ buffer zone have already been taken. A new recreational pot shop would have to locate in the few allowable zones left. Recreational consumers would have to bypass the numerous dispensaries close by to drive out to some far flung location to purchase legal marijuana.

If many or most of the medical dispensaries convert to recreational sales, however, the opposite will be true. Except this time, it is a sick or disabled person who has to decide whether to pay a likely 20 percent tax on marijuana at the nearby pot shop or find someone to drive them to the far flung location to purchase tax-free medicine.

What terrible consequence befalls society if two or more marijuana stores are near one another? There are places I can go in Portland to find multiple strip clubs, coffee shops, taverns, food carts, theaters, and clothing retailers within 1,000 feet of each other. They provide a comparison shopping benefit for the consumer. Why should we encourage greater traveling distance for marijuana consumers to comparison shop?

City officials say they are leery of pot-saturated locales reminiscent of Hayden Island’s “lottery row”. But under current rules, legalization means an area goes from having one marijuana-selling building within 1,000 feet to two; it would hardly be like “lottery row”. The real question is why should there be two different buildings for selling marijuana?

Medical marijuana advocates will tell you that patients need high-quality medicine and well-trained servers to help them select it. Patients should also not be taxed for their medical purchases. Without separate dispensaries, they argue, there won’t be a guaranteed supply of medically-specific marijuana products, like CBD oil, RSO oil, salves, and tinctures.

So, why not have just one system for producing, processing, and selling marijuana? Set the quality regulations and service standards at the point the patient requires; the recreational consumer isn’t going to mind not being poisoned by pesticides and being served by a medically-knowledgeable budtender. Require by regulation that a certain percentage of product produced and sold in pot shops must be medically-specific varieties. Then just don’t press that “tax” button on the cash register or limit a customer to one ounce when it’s a patient making the purchase.

Under this scenario, pot shops could still be kept 1,000 feet from each other without negatively impacting patients or recreational consumers. It’s so damn logical I expect it will be years, if ever, before we see it happen.