Portland Police Being Sensible on Marijuana at the Blues Festival 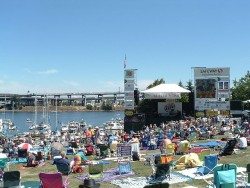 The Portland Police, for the most part, have been very sensible on marijuana policy in recent history. Realizing that they have more important issues to tackle, law enforcement, both in the police bureau and district attorney’s office have reasonably concluded that marijuana is a very low law enforcement priority, especially anything resembling personal use that’s not disrupting anyone else. The pragmatism has continued, thankfully and not unexpectedly, into the new era of  legalization in Oregon after July 1st.

First, the Portland Police issued a very Portland-esque visual to help people know how much marijuana adults over 21 can legally possess, comparing mounds of marijuana to the size of a Voodoo donut. Next, came the announcement that Portland law enforcement wasn’t concerned about adults bringing legal amounts of marijuana back from Washington State. And now, the Portland Police have stated that they won’t be ticketing marijuana users at the Waterfront Blues Festival.

Portland Police Sergeant Pete Simpson says the focus will be on public safety, not writing tickets, “We are relying on the security that’s hired by the event to manage the event appropriately,” he said.

“And for folks that are there that are concerned about it, we’re asking them to contact security and have them address it appropriately. We don’t want people calling 911. These are not emergency situations. If someone is driving a car [while] smoking, that’s a different story.”

Simpson says officers can write tickets for public pot smoking. The fine varies from about $260 to $1,000.

I certainly do not encourage anyone to use marijuana in public or cross state lines with it, but it is encouraging to see that the Portland Police have taken a reasonable stand on the issue. I expect that public smokers in the future, particularly those who are smoking close to minors or garner several complaints, will be ticketed, but it is a public service and a better use of resources to educated the public and prioritize more serious matters. The cannabis community and law enforcement haven’t always seen eye to eye, but it is a great step in the right direction when law enforcement embraces regulation and legalization, instead of lobbying to return to prohibition. Better prioritizing law enforcement resources is one of the major reasons voters supported the Measure 91 legalization measure and thus far the Portland Police are following the will of the voters.