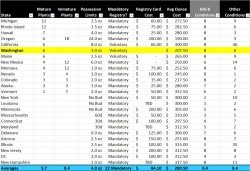 Most recently in Oregon, House Bill 3400A passed, which mandated some changes to the medical marijuana program. Drawing the most ire is limitations on the total number of mature cannabis plants that may be grown at one garden.

But then growers started exploiting the loophole that multiple growers could be growing at one location. Next thing you know, there’s a headline about Oregon’s largest medical marijuana garden cultivating 624 mature plants for 104 patients by 26 growers on one property.

As a bonus for lousy publicity, it also turned out they were exploiting another unique aspect of Oregon’s law, the fact that out-of-state patients can get a card. Those 104 patients supporting a marijuana farm were all from California, mostly Los Angeles.

Oh, how the medical marijuana advocates have screamed about this. Patients will be hurt! Access will be restricted! Really? We’re restricting existing residential gardens to the original four-patient limit and existing non-residential gardens to what four growers could have produced for four-patients each, setting new residential gardens at the two-patient limit and new non-residential to an eight-patient limit, maintaining hundreds of storefront dispensaries that will remain tax-free and gave them the right to remain even if a school moves in next door, and patients can still possess 1.5 pounds of marijuana… and patients are going to suffer? My God, how do they ever get by in Vermont or Maine?

But the real wailing is in Washington State, where they can actually point to some deeper cuts. Where possession was once 1.5 pounds, it’s now just 3 ounces. Where they could grow 15 mature plants, they can now grow only 6. Where they used to shop at hundreds of tax-free dispensaries, they’ll now show at dozens of I-502 shops charging a 37 percent excise tax.

To a mild degree, I understand the anger. Taxing medicine is pretty Scroogian. Losing 60 percent of your plants sucks. Losing 87.5 percent of your possession sucks. But the thing that sucks worse than all of that is continuing the arrests of roughly 5,000 healthy marijuana consumers a year for misdemeanor possession.

There is a “first, do no harm” mentality when it comes to some medical marijuana advocates. In a sense, with them our freedom as healthy cannabis consumers is held hostage to the ideal of a perfect medical marijuana program. Yes, they’ll tell you, of course we support marijuana legalization for all people… but only if it doesn’t change medical marijuana one iota.

Some medical marijuana advocates like to pretend that Pacific Northwest medical marijuana was cruising along just fine, beloved by the public and tolerated by legislators, and would have continued to exist untouched if only those meddling kids and their recreational marijuana hadn’t come along. But it wasn’t; cities across both states were banning dispensaries because of their obvious winking and nudging about the true medical need of their customers, legislators were hankering for a crackdown on the most obvious abuses, and the public was growing weary of massive unregulated marijuana farms.

There were serious changes coming for Pacific Northwest medical marijuana before legalization, but legalization shone a spotlight on just how much medical marijuana needed to be reined in. And even with all these changes, Washington State drops from first to just sixth place out of twenty-five medical marijuana states in cultivation and possession limits. It’s one of only 13 of 25 states that allow home growing. It’s got more mature plants than all but 3 states, and a doctor can recommend more. It’s got greater pot possession than all but 5 states. It’s one of only 3 states with voluntary registries. It’s got the lowest price per ounce, even with tax, than all states but Oregon. Washington patients can form 4-person co-ops and grow 60 plants, unlike any state.

I can think of a whole lot of states that wish they had a medical marijuana program as devastated as Washington’s and Oregon’s.