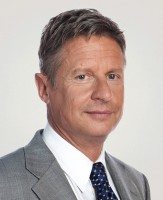 Fresh off the heels of the International Cannabis Business Conference (ICBC) in San Francisco that featured long-time California Congressman Dana Rohrabacher calling for an end to cannabis prohibition and declaring federal medical marijuana prosecutions illegal, the Oregon Medical Marijuana Business Conference (OMMBC) on March 15-16 will feature a keynote address by Gary Johnson, a former 2-term governor of New Mexico. While cannabis legalization is often seen as a liberal policy most often associated with Democrats, it’s very notable that both Rohrabacher and Johnson were elected Republicans.

Johnson, a self-made millionaire business man rose up the political ranks in New Mexico after creating a successful construction business that started as as a one-man venture that grew into one of the state’s largest construction companies. As a dark horse candidate that stressed fiscal responsibility and personal liberty, he left office with balanced budgets and thousands of more jobs created. During his second term, Johnson became much more vocal about the need for marijuana law reform and civil liberties issues became a foundation of his eventual campaigns for president, both as a Republican and then as the Libertarian Party nominee.

The former governor has since became a much more outspoken proponent for marijuana legalization, even joining the industry as CEO of Cannabis Sativa, a Nevada-based company. According to CBS News, Johnson agreed to get paid in stocks, only earning money if the shareholders profit as his salary is merely $1 per year. Former Alaska US Senator Mike Gravel has also accepted a position with a subsidiary of Cannabis Sativa, showing the that business venture, and the fight to legalize marijuana itself, is a bipartisan effort.

I’ll certainly have more to blog about Gary Johnson and the rest of the OMMBC over the next month, and full disclosure, I help organize both the ICBC and the OMMBC. Both efforts I am extremely proud of as they bring together both industry entrepreneurs and activists so that we can all network and learn from one another, as we keep in mind the importance of protecting medical cannabis patients while ending the arrests, prosecutions, persecutions and imprisonment of the cannabis community. The regulation, legalization and taxation of marijuana will of course create jobs and revenue, but our cause will always be about freedom and civil liberties first and foremost. The OMMBC will focus on Oregon’s current medical law while providing insight into the future of legalized cannabis for all adults, providing opportunities to network and learn, whether you are doing business in Oregon or another state. You can learn more at www.ommbc.com.