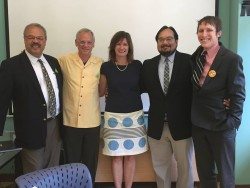 This past Oregon legislative session, I was pleased to learn about House Bill 3372, Representative Lew Frederick’s bill designed to release nonviolent marijuana offenders from prison. I set up a meeting to discuss the bill with Rep. Frederick and to see if he was open to amending HB 3372 so that everyone convicted of marijuana offenses could retroactively have their convictions changed in accordance with Measure 91, Oregon’s recently-passed cannabis legalization law. Representative Frederick agreed and I was hopeful that we could get a bill passed this session. Unfortunately, it looked like HB 3372 was not going to pass out of the Oregon House Judiciary Committee.

After I had frankly given up hope on HB 3372, I was contacted by Aaron Brown, Outreach Coordinator for the Bus Project. The Bus Project, a nonprofit group promoting democracy and equality, was fresh off of helping pass the New Motor Voter Bill that will automatically register hundreds of thousands of Oregonians when they update their driver’s license info. Looking for a new, worthwhile bill to promote, the Bus Project realized that saddling nonviolent people with felony criminal records for actions that Oregonians just legalized was unjust and simply a bad policy. I shared my pessimism with Aaron, but he was undeterred and his optimism inspired me. The Bus Project and New Approach Oregon, the political action committee responsible for the Measure 91 legalization measure, joined forces to lobby the House Judiciary Committee to pass House Bill 3372. More than a thousand signatures were collected from Oregon voters, the #FreshStartOregon social media campaign promoted the bill online and many phone calls were made to legislators. Despite our best efforts, HB 3372 died in committee without getting a hearing.

When it looked like all hope was lost for the cause once again, Representative Ann Lininger, co-chair of the Joint Committee on Implementing Measure 91, stated that something similar to HB 3372 could potentially pass through the Measure 91 Committee, but that we would need to demonstrate bipartisan support. More signatures were collected, the social media campaign ramped up again and New Approach Oregon and the Bus Project launched a phone banking operation at the Bus Project’s headquarters. The effort to expunge past marijuana offenses and set aside old convictions to be in line with Oregon’s new cannabis laws had its up and downs in the M91 Committee and we weren’t sure if such a bill was going to pass. We never gave up and kept at it and we were pleased that such provisions were included in House Bill 3400 and that juvenile marijuana expungement provisions were passed out in Senate Bill 844. At the time of this blog’s typing, HB 3400 has been signed by Governor Kate Brown, but we are still waiting for her to sign SB 844.

Most of the time that marijuana legalization is covered by the media, it seems that the economic and tax benefits are touted as the major benefits of ending cannabis prohibition. However, for me and most activists, the human element is the real reason that we fight this fight. It is heartbreaking to hear about lives severely disrupted and ruined by marijuana laws. When you hear from people who are battling poverty or living paycheck to paycheck because of past marijuana felonies, you can’t help but feel for them and wonder why they happened to be so unlucky, when others, including the President of the United States, was fortunate enough to avoid arrest. When you hear from great parents that can’t volunteer for their kids’ sports teams or school activities because of past marijuana offenses, you don’t have a heart if you don’t feel for their pain.

The Oregon State Police concluded that more than 78,000 people are now able to set aside their old marijuana conviction to be in line with Oregon’s new marijuana laws. It feels great to have played a part in benefiting the lives of tens of thousands of people and I am so proud of everyone who helped this important campaign, especially the Reps. Lininger and Frederick and all of the New Approach Oregon and Bus Project staffers and volunteers.

Inspired by the work locally, Congressman Earl Blumenauer has taken the campaign national, announcing that he is introducing the “Clean Slate for Marijuana Offenses Act of 2015“. We all know that the fight to pass such a measure federally will take time, but criminal justice reform is one of the few bipartisan issues of our day. It makes absolutely no sense to saddle nonviolent citizens with felonies, harmful scarlet letters, that hurt their educational, housing and employment opportunities for actions that are now legal in their state. And of course, these scarlet letters are disproportionately inflicted upon people of color and people battling poverty.

Oregonians should be proud of leading the way on this issue. As far as I know, and I’ve spoken with prominent activists from across the country about this issue, retroactively setting aside past marijuana convictions and providing earlier expungement opportunities, is the first-of-its-kind legislation in this country. The four other states that have legalized marijuana haven’t passed this type of legislation and states that have lowered marijuana penalties haven’t allowed past offenders to change their convictions to be in line with the new law. It is only fair to allow people unlucky enough to be caught with marijuana to set aside their old convictions to be in line with the new law.

Not everyone is as lucky as President Barack Obama or George W. Bush or Bill Clinton or Al Gore or Newt Gingrich or Carl Sagan or Michael Phelps or the many, many prominent people who could have had their lives and careers derailed with just a little bit of bad luck. Thank you, Oregon, for leading the way and for Congressman Blumenauer for taking this important fight national. Hopefully, other states, and eventually the federal government, will soon catch up to Oregon. Step by step, state by state, until we are all equal and free.