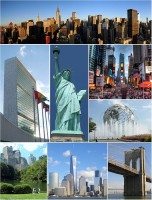 New York City, the media capital of the world, is obviously one of the most influential cities in the world. New York State, in turn, is a very influential state and news out of the area resonate across the country, if not the globe. I remember when the New York Legislature passed a marriage equality bill. I, along with many civil libertarians, were watching the live stream of the debate and vote, live-blogging away on our various social media outlets.

New York State was one of the first states to decriminalize cannabis in 1977, but the law was subverted in NYC because people, disproportionately people of color, were asked to empty their pockets and would then be subjected to the more harsh penalty for possessing marijuana in public. Fortunately, and finally, NYC Mayor Bill de Blasio and NYPD Commissioner Bill Bratton announced that the NYPD would stop this arbitrary and harmful practice that was subverting the spirit of the state’s decriminalization law.

I, along with other cannabis law reform advocates, was heartened when Governor Andrew Cuomo threatened to not give state legislators a pay raise unless they passed a full decriminalization bill, thinking that we may have found our early dark horse presidential candidate, just to be disappointed to learn that Cuomo had abandoned the decriminalization effort, but he at least was supporting medical cannabis legislation. And while the state’s recently-passed medical marijuana law is far from perfect, as it doesn’t allow for home cultivation and only legalizes the purchase of non-flower products from one of only 5 dispensaries that will be allowed, New York certainly made news when it did become our nation’s 23rd medical marijuana state.

Now, New York City, is helping push sensible marijuana law reform again, as the city council has formally requested  that the state legislature decriminalize, regulate and tax marijuana. These important reforms would be great for the budget of New York and the citizens unnecessarily arrested, prosecuted and jailed for marijuana offenses. The Drug Policy Alliance issued a press release announcing that the New York City Council calls for marijuana law reform:

New York: This week, the New York City Council called for the state of New York to pass historic legislation to both decriminalize and to tax and regulate marijuana. As part of the Council’s State Budget and Legislative Agenda for the 2015-2016 legislative session, the New York City Council urged the state legislature to pass two historic marijuana policy reforms – the Fairness and Equity Act and the Marijuana Regulation and Tax Act (MRTA). The Speaker of the City Council, Melissa Mark-Viverito had previously announced her support for marijuana legalization in November, but this marks the first time that marijuana decriminalization and legalization have been part of the Council’s official legislative agenda.

The Fairness and Equity Act — sponsored by Senator Daniel Squadron and Assemblyman Robert Rodriquez — would finally fix New York’s decriminalization law regarding possession of small amounts of marijuana, ending racially bias marijuana arrests. The Council noted that the Act would “end the unnecessary and disproportionate arrests of Black and Latino New Yorkers by ensuring that possession or sharing of small amounts of marijuana can never result in a criminal penalty.”  The proposal includes additional provisions to meaningfully address the devastating collateral consequences and historic legacy of these arrests and reduce institutional racial bias across New York’s criminal justice system.

The Council also threw its support behind the Marijuana Regulation and Taxation Act — sponsored by Senator Liz Krueger and Assemblywoman Crystal People Stokes — which would end prohibition by creating a system to regulate, control, and tax marijuana in a manner similar to alcohol for adults 21 years of age or older. The Council noted that  the MRTA would “would reduce the racially disparate impact of existing marijuana laws and end the cycle of branding nonviolent New Yorkers as criminals,” while generating millions of dollars in new revenue and saving millions of dollars in criminal justice resources each year.

The Council’s endorsement of these sweeping marijuana policy reforms comes at a pivotal moment for drug policy reform nationally, as last year’s elections accelerated the unprecedented momentum for marijuana law reform and other criminal justice reforms. With marijuana legalization measures passing in Oregon, Alaska and Washington, D.C., and with groundbreaking criminal justice reforms passing in California and New Jersey, the election solidified drug policy reform’s place as a mainstream political issue. Both in New York and nationally, public opinion has shifted dramatically over the last decade in favor of reforming marijuana laws and dismantling the egregious excesses of the drug war.

Speaker Melissa Mark-Viverito has led the charge in the New York City Council since 2012 for sensible marijuana reform. She was the lead sponsor on the successful NYC Council resolution 986-A which called for an end to racially biased, costly, unlawful arrests. The resolution was co-sponsored by a majority of Council members and passed by an overwhelming majority during the June 2012 Stated meeting. In 2014, New York City Council member Stephen Levin introduced the NYC Council resolution 0011 in support of the Krueger/ People Stokes’ tax and regulate bill with several city council co-sponsors, including, Council members Maria Del Arroyo, Jumaane Williams, Antonio Reynoso, Rosie Mendez, Karen Koslowitz, Daniel Dromm, and Mark Levine.

The New York City Council is demonstrating smart leadership on marijuana policy. Voters in New York City elected a progressive city council and mayor because we value fairness, equity and justice. Unfortunately, New York’s current marijuana policies, coupled with biased policing practices and devastating collateral consequences, harm the lives of hundreds of thousands New Yorkers, predominantly patients and young people of color. New Yorkers have had enough. We stand with Speaker Mark-Viverito, the NY City Council and New Yorkers across the state in demanding that Albany fix our broken marijuana policies and address years of racially biased criminalization by immediately passing the Marijuana Regulation and Taxation Act and the Fairness and Equity Act. It’s time to end marijuana prohibition. It’s time for a new approach.

“The Council’s public support for marijuana legalization is exactly the type of progressive and bold leadership we need to end the failed war on drugs and reform our broken criminal justice system. With this policy statement, the Council has showed that they understand that it is unjust and unfair to criminalize mostly black and brown New Yorkers for an activity that poses no public safety threat and happens in every corner of the city. I hope Albany will heed the call of the Council and pass these two pieces of legislation so that we can move forward a vision of drug policy that is rooted in public safety and health, not costly and biased incarceration.”

A sincere thanks to the New York City Council for making this sensible request and to the Drug Policy Alliance for their work to help move this effort forward. Such progress in New York would not only benefit the residents of the state, and the many tourists visiting the Big Apple and the rest of the state, but it would also add to the momentum we are seeing across the country and the globe.