My Marijuana Questions for 2016 Presidential Candidates 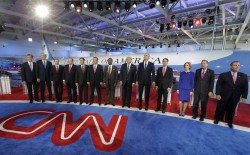 I’m a political junkie and have watched all of the Republican and Democratic presidential debates so far. If I were one of the moderators, these are the marijuana questions I’d ask the candidates for president:

Secretary Clinton, you’ve often said that you’re generally in support of medical marijuana, but that the issue needs more research. With over 28,000 studies currently in PubMed regarding cannabis, how much more research will it take for you to form a stronger opinion?

Governor O’Malley, you were the mayor of Baltimore, a city with drug dealing so rampant that two popular television shows chronicled it. But that drug dealing also is often the only working economy in many urban areas. Do you think legalizing drugs would reduce urban violence and how would you do it to ensure these urban areas and their people get to participate in that new legal economy?

Mr. Trump, should a pot smoker in a state that’s legalized marijuana have full and unconditional Second Amendment rights?

Senator Cruz, you speak strongly about your reverence for the US Constitution. Which part of the Constitution do you believe gives the federal government the right to ban the industrial hemp crops our Founding Fathers farmed?

Dr. Carson, as a neurosurgeon, can you explain the functions of the endocannabinoid system within the human brain?

Senator Rubio, you gained notoriety for sipping a bottle of water as you delivered the Republican response to the State of the Union. Did you have a dry mouth from recently smoking pot?

Governor Bush, you have been candid about your daughter Noelle’s struggles with addiction. Yet as governor of Florida, you presided over a state that will take a pot smoker’s voting rights for life if he’s caught with 21 grams of marijuana. Do you only support compassion for drug users if they’re named Bush?

Governor Christie, you have said you would “crack down and not permit” marijuana legalization to continue in Colorado and Washington. As president, how many federal agents and troops are you willing to commit in those states to make that promise a reality?

Ms. Fiorina, you responded to a question about marijuana legalization by bringing up the tragic death of your daughter. Yet marijuana had nothing to do with your daughter’s death. Do you really see marijuana use as something on par with the struggles with hard drugs your daughter fought and lost?

Senator Paul, marijuana reformers look to Bernie Sanders on the Democratic side and you on the Republican side as most friendly to our cause. How would your treatment of marijuana in Paul Administration differ from the Obama Administration, and for that matter, a Sanders Administration?

Governor Huckabee, you have famously struggled with obesity throughout your life, even writing a book about the issue. Which do you think, marijuana use or obesity, is more harmful to a person’s health?

Governor Gilmore, you once said that marijuana is “not a substance, it’s a lifestyle”. Does that mean your opposition to marijuana legalization isn’t based on the science of the substance, but is rather part of a broader culture war?