Move Forward With Bernie Sanders, the Quad-City Times Urges as Iowa Is Too Close to Call 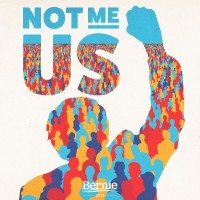 Political junkies like myself were waiting anxiously as the final Des Moines Register Iowa caucus poll was announced this afternoon. The poll is widely respected as having the best grasp on the hard-to-predict Iowa caucus.

Not surprisingly, Donald Trump leads the Republican field, although Ted Cruz is in striking distance of 5 points. I fully expect Trump to secure the GOP nomination as there doesn’t seem to be anything he can do to hurt his standing, from mocking someone with a disability to making racist statements to joking that he can even get away to shooting somebody to skipping the last Fox News debate. Also, not surprising, the Democratic race is too-close to call, with frontrunner Hillary Clinton eking out a 3-point lead 45-42 over Vermont Senator Bernie Sanders.

Turnout is gonna be key for both parties as both Trump and Sanders are heavily favored by first-time caucus goers. If there is a big turnout, something remotely similar to the 2008 wave that carried Barack Obama to victory, we can expect a Sanders victory speech preceded by a little Simon and Garfunkel. If the 2016 Democratic electorate is just the run-of-the-mill, usual voting bloc, then the establishment wins, not only Iowa, but probably the nomination, and we all brace ourselves that further email scandals or new revelations of a Bill Clinton sex scandal doesn’t swing the presidency to Donald J. Trump.

As political pundits were waiting on the Register’s poll, the Quad-City Times released their endorsement, urging Democrats to caucus for Senator Sanders. Most major newspapers will certainly endorse Clinton, the establishment favorite, and newspaper endorsements are less valuable each and everyday, but this endorsement very articulately sums up what many of us Sanders supporters are feeling–that Sanders is a continuation of the “hope and change” of the Barack Obama campaign while Hillary Clinton is the Washington status quo of the Obama Administration.

The Obama Administration has been okay, for many of us, and a continuation of gridlock and incremental change is better than taking steps backward, but we can do better. We are still believing in a campaign that believes in “Yes We Can” (or “Bern it Up“) and reject a campaign of “Never, Ever“.

I have some good friends and many people that I respect endorsing Hillary Clinton. These good folks usual rely upon Clinton’s experience, I just respectfully disagree that her experience shows that she would be the right president to win this general election and to lead our country.

While much is made of Hillary Clinton’s experience, the Quad-City Times Editorial Board rightfully brings up recent issues where Senator Sanders was on the right side of history while Clinton was on the wrong side: the war in Iraq, the Patriot Act and the Wall Street bailout. For good measure, the paper could also have mentioned Clinton’s flip flops on marriage equality, the Keystone XL pipeline and the Trans-Pacific Partnership trade agreement, all issues that Sanders has consistently been in line with progressive values and the base of the Democratic Party.

More from the Quad-City Times endorsement:

Clinton told us she can get things done, thanks to relationships built with Republicans. Sanders, she argues, can’t, because his rhetoric is too extreme. However, a Clinton presidency would likely mirror that of President Barack Obama. Democrats aren’t taking back the House anytime soon. Clobbering the Clintons has been the pastime of House Republicans for decades. Gridlock is the only result of years of disdain, mistrust and wasteful congressional investigations.

In 2008, voters rejected Clinton for what they thought was a new era of political discourse. Obama has had his moments, for sure. But his supporters didn’t get the new-century paradigm shift they desired. The corporatism persisted. Special interests and the wealthy continue to own Washington. Clinton is incapable of changing that. She’s just too plugged in.

If the Democratic Party is to move forward, it must abandon its compromised policy and differentiate itself come November. Only Sanders can accomplish that goal.

There is no doubt that Hillary Clinton has experience, but Bernie Sanders has demonstrated better judgment, not just on social issues, but also on the biggest foreign policy vote of our time. Like Sen. Sanders has stated, Dick Cheney has plenty of experience as well. Judgement matters and Sen. Sanders has been on the right side of history on a whole host of issues and actually has plenty of experience himself, even as an executive, something that Hillary Clinton doesn’t have.

Yes, Bernie Sanders lacks the foreign policy experience of Clinton as it is hard to compete with a former Secretary of State, but what good is experience when you support quagmires in the Middle East that have destabilized our globe and created terrorist groups like ISIS? Hillary Clinton’s hawkish foreign policy, to the right of President Obama, should definitely give anti-war voters pause.

Let’s give change another shot, folks

Hopefully, Iowa caucus goers will choose the candidate who has demonstrated better judgement on domestic policy, civil rights, criminal justice and matters of war and peace. Iowa voters gave us hope eight years ago, here’s hoping that they don’t settle for the status quo in 2016. Hopefully, Hawkeye voters give us another shot at true change, from ending cannabis prohibition to providing healthcare for all to avoiding another ill-fated Middle Eastern quagmire.