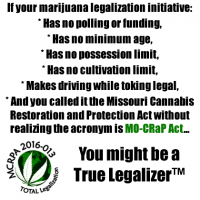 The Missouri Cannabis Restoration and Protection Act, a.k.a. Missouri True Legalization™ or The MO-CRaP Act, has come under scrutiny for possibly evading Missouri campaign finance laws. Under the statutes, all political committees must report the name, address, occupation and employer of anyone contributing $100 or more, either in a single donation or over the course of a campaign.

As reported by the Columbia Tribune:

Unlike most other initiatives, the campaign has not reported donors or spending to the Missouri Ethics Commission. Instead, costs are being paid by the Cannabis Restoration & Protection PAC, incorporated for $25 by Mark Pedersen of Kirkwood. [Organizer Nick] Raines directed questions about the financing effort to Pedersen, who did not respond to an email seeking an interview.

“The campaign is funded by everyone,” Raines said. “It is volunteers, basically. We are doing really well, and at last count we were more than halfway there.”

This is not the first unfunded, all-volunteer, True Legalization™ campaign I have covered. I’ve dealt with many a True Legalizer™ in California, Oregon, Washington, and Colorado who year after year promised their pie-in-the-sky initiatives would get on the ballot and pass.

Worse, I’ve seen too many tokers get riled up by True Legalizers™ to fight against the professional legalization campaigns that have a shot of winning. If you’re running an all-volunteer campaign for marijuana reform in some place like Idaho or Wyoming, good for you, because that’s the only public discussion of reform those states are going to get.

But Missouri has a professional marijuana reform campaign that has a good shot at bringing medical marijuana to the state. If you’re going to spend time and money chasing unattainable phantoms of legalization when you could enact the actual reform of medical marijuana, which has been shown to be the predicate to marijuana legalization, I’m going to cast some aspersions your way.

I’ve recommended that when someone asks for your time and money to support a marijuana legalization campaign, you ask them the following three questions:

1) How well does your language poll?

2) How much money have you raised?

3) How many signatures have you gotten?

In light of this story, there needs to be a fourth question:

4) Which professionals have you hired to run your campaign?

If the True Legalizers™ in Missouri can’t even manage the basics of campaign finance disclosure, something that could seriously hamstring the campaign, you have to guess the answer to 4 is “nobody”.

It’s nothing personal. I’d love it if True Legalization™ could make the ballot and pass in Missouri. The only problem is this pesky thing called “math”.

After numerous attempts to discern the answers to questions 1 & 2, I’ve got nothing but stonewalling from supporters of the True Legalization™ campaign. But the Columbia Tribune article and other commenters have suggested that this campaign is over “halfway there” in gathering signatures for their amendment.

I’ll be generous and assume they mean the realistic “halfway there.”

Now, this PAC they are using to conceal campaign funding was founded in mid-March 2015. Let’s use that as the starting point for “halfway there”. With ten months between then and now, “halfway there” works out to a rate of 12,500 signatures per month.

There remain less than four months between now and May 8. So, this all-volunteer shadow-funded campaign for True Legalization™ could be expected to pull in another 50,000 signatures.

These calculations could be wrong. Perhaps the campaign’s shadow PAC was formed in mid-March, but they didn’t start gathering signatures until later. But the earliest snapshot of their website calling for signature gathering is dated mid-June. If that’s our “halfway there” starting point, they’ve gathered signatures for seven months at a rate of 18,000 a month, which will leave them about 53,000 signatures short.

They need a quarter million signatures. They’ve got fifteen weeks. If “halfway there” is 125,000, they need 8,333 signatures per week.

Professional signature gatherers could easily accomplish this for $1 to $3 per signature, but the True Legalization™ campaign steadfastly refuses to offer any funding figures, so we don’t know if they have the $125,000 to $375,000 necessary to hire them (my guess: they don’t).

Keep in mind this is just the Herculean task of getting enough signatures to make the ballot. After that happens, there will be six months of time for campaigning, which the True Legalization™ campaign seems to be lacking funds to accomplish. You can be sure that the Missouri cops and rehabs won’t be lacking for funds and airtime to campaign against it.

And what a campaign it will need to be! This True Legalization™ would be far more expansive than any of the four currently legal states and the five states (CA, AZ, NV, MA, ME) considering legalization in 2016. Imagine the attack ads cops and rehabs will produce for True Legalization™ that proposes:

So we’re to expect that Missouri, a state that barely notches majority support for strictly taxed and regulated marijuana, is going to embrace legalization that allows sixteen-year-olds to drive around town smoking a quarter pound of pot.

Don’t waste your time with the True Legalizers™. Put your money and effort into New Approach Missouri and actually accomplish something.