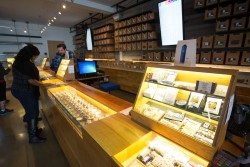 From afar, it seems that Michigan has certainly had an interesting marijuana law reform experience. Ann Arbor has long had a sensible cannabis policy and the college town was an inspiration for my very first attempt at helping author a marijuana law reform measure in Columbia, Missouri. It seems to me that advocates have pragmatically advanced medical marijuana measures along with local reforms to move the state toward eventually legalization. Ending prohibition could come to the state in 2016 as Michigan activists file marijuana legalization measures that could bring a sensible cannabis policy to the Midwest (I’m hopeful that my birth state of Missouri will be joining them as well).

From the Lansing State Journal:

Years behind other states, Michigan is seeing competing groups form rapidly to push for ways to legalize the drug, with players possessing more political savvy, more money and more conservative politics than in the past.

Their appeals? The promise of a rush of tax dollars for cash-strapped government budgets, tens of thousands of new jobs, safer access to cannabis for medical users and fewer nonviolent stoners taking up police attention and jail space.

“The first thing we’re saying is regulate it and the second thing is, let’s bring in tax revenue,” said Matt Marsden, spokesman for the Pontiac-based Michigan Cannabis Coalition.

There are competing measures seeking placement on the 2016 election. While different initiative campaigns poses some difficulties as it can split resources and confuse some voters, most successful efforts have had to survive multiple measures, including Oregon in 2014. Competing measures can help campaigns hone their political skills and I urge all advocates to agree to disagree amicably publicly and remember that everyone is working to end prohibition. While it is reasonable to support one measure over the other, we should always support the measure on the ballot that improves the status quo. So long as fewer lives are ruined by prohibition, it is important to keep our eye on the prize. Good luck, Michigan advocates, cannabis activists across the country are pulling for ya.