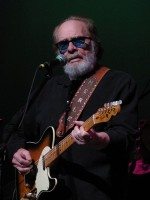 Merle Haggard had a legendary career and life. Known as a pioneer of  the “outlaw country” movement, Haggard was inducted into the Country Hall of Fame in 1994. A friend of cannabis community icon Willie Nelson, Haggard was once anti-marijuana, but he evolved and became a cannabis connoisseur. Today, the legend passed away at age 79.

Commenting on his evolution from anti-cannabis to pro-cannabis, the outlaw country legend told Men’s Journal that he was once “brainwashed like most of America.” “But if a guy doesn’t learn anything in 50 years, there’s something wrong with him. I’ve learned a lot about it, and America has, too.”

The evolution from anti-marijuana to cannabis connoisseur can be seen in the evolution in Haggard’s music. When Haggard recorded “Okie from Muskogee” he didn’t use marijuana, but that clearly changed as he grew older (and wiser).

As Rolling Stone noted, many country artists have commemorated the very influential outlaw:

Eric Church recruited the very inspiration behind his “Pledge Allegiance to the Hag” to join him on the song. Today, Church sent an email to his fans, containing simply these poignant lyrics:

Rest In Peace.
One of these days when my time has come
You can take me back to where I’m from
Put me on a westbound train
And ship me off in the pourin’ rain
Don’t cry for me when I’m gone
Just put a quarter in the jukebox and sing me back home and
Tip your hats and raise your glasses of cold cold beer
They say country’s fading
But just keep waving that flag around here
And I know it’ll keep on coming back
As long as people pledge allegiance
Where folks still pledge allegiance
I pledge allegiance to the Hag

Leaving no question that he was done with his anti-marijuana ways, Merle Haggard recorded “It’s all going to pot” with Willie Nelson, which I’ll leave you with. Rest in peace, Mr. Haggard.