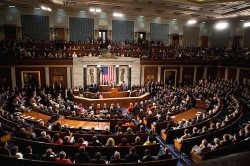 Several marijuana law reform measures were voted on in the United States House of Representatives on Wednesday, with the most progressive measure was defeated 206-222. Congressman Earl Blumenaur’s amendment that would have officially allowed states’ to chart their own course on marijuana legalization narrowly failed, but states are primarily free from federal interference so long as following guidelines set forth by the Obama Administration. Hopefully, the next presidential administration will follow Obama’s marijuana policy, if not improve upon it. Wednesday’s narrow vote does demonstrate progress and it certainly looks like a states’ rights to marijuana bill looks passable in the next few years. As The Oregonian notes, progress was made on other fronts:

The House did pass three other amendments supportive of medical marijuana and the production of hemp, a non-psychoactive form of marijuana.

Representatives approved an amendment co-sponsored by Oregon Rep. Suzanne Bonamici that continues to prohibit the Drug Enforcement Administration from undermining laws in Oregon and other states that allow the production of hemp.

Also approved were amendments continuing a prohibition on federal interference with state medical marijuana laws and protecting state laws that allow the use of CBD oils from cannabis plants that have a variety of medical uses.

Wednesday’s vote in the US House is the latest example of elected officials creeping closer to the marijuana mainstream, but still lagging behind national polls. As cannabis law reforms are passed in cities and states across the nation, we can expect more and more elected officials to finally represent their constituents on the issue. The 206-222 vote is actually very heartening for me as it is only a matter of time before the common-sense provision is passed.

It doesn’t make any sense for the federal government to waste resources to interfere with states’ marijuana laws. A majority of Americans support legalization and a super-majority wants Uncle Sam to allow states to be the laboratories of democracy. While we don’t have enough Earl Blumenauers in Congress, the advances being made demonstrate the great leadership of Rep. Blumenauer and the undeniable fact that marijuana has gone mainstream and prohibition’s days are numbered.