Marijuana Consumers Becoming Legal, But Not Yet Free

I’m taking some heat from people who find my analogy “prohibition : Civil War :: legalization : Jim Crow” to be offensive. It probably is to some people; I’m a healthy, able-bodied, cis-gendered, heterosexual, middle-aged, middle-class, tall, overweight, educated, married Caucasian American male. I could only have more privilege if I were rich, had kids, more hair, and believed the Bible.

I think people who know me can best judge my character and understand my intentions. I believe that Jim Crow was legalized bigotry; I’m trying to express how I feel the law treats cannabis consumers in a bigoted fashion and I can think of no other analogy that better fits the definition. I did not mean to offend you. I only intend to provoke people who don’t understand that this fight isn’t about ending the criminality of a plant so much as recognizing the civil rights of my community. Perhaps my perspective as a privileged white guy who should feel eight-foot-tall and bulletproof in America makes me hypersensitive to the minor oppression I have faced.

I understand the analogy is not accurate in degree, but I believe it is accurate in some similarity. Yes, being a stoner under prohibition is, at worst, a “3” on the imaginary ten-point scale of oppression, and I suppose living as a black person under Jim Crow must be an “8”. I don’t think there needs to be a balancing test when we discuss ending oppression and recognizing civil rights, or else we’re all going to have to preface every discussion with “It’s not as bad as what happened to the…” I don’t know, pick, which oppression cranks it up to “11”, the Holocaust, the genocide of Native Americans, the Great Purge by Stalin, the Crusades, slavery under the Pharoahs…?

Neither is the comparison exactly complete. I’ll readily admit we cannabis consumers still get the right to vote, drink from the same fountains, and aren’t being lynched. To the degree the Jim Crow analogy fails, I apologize for the offense I caused.

We cannabis consumers have been, and continue to be, victims of unjust laws.

“An unjust law is a code that a numerical or power majority group compels a minority group to obey but does not make binding on itself This is difference made legal. By the same token, a just law is a code that a majority compels a minority to follow and that is willing to follow itself. This is sameness made legal.” – Dr. Martin Luther King Jr., Letter from Birmingham City Jail

We still suffer from code that prosecutes and persecutes us, the minority group that produces and consumes cannabis, that is not binding on the majority group that produces and consumes ethanol, nicotine, caffeine, barbiturates, benzodiazepenes, hallucinogens, opiates, and any number of other substances, including sugars and fats. (Guess which item in this paragraph has never killed anyone?)

We can be legally denied employment and removed from current employment merely for being who we are. No, not high on the job, but merely having the metabolites of cannabis use in our bodies while working perfectly sober next to employees nursing hangovers and gulping pills, metabolites that only prove who we are, not how we behave or the value of our character.

If we’re in an accident, who we are is used to deny us unemployment and workmen’s comp and insurance benefits we worked and paid for.

We can be legally segregated into lesser colleges or denied college admission because who we are disqualifies us from certain scholarships and financial aid.

We can be legally separated from our children by family courts when an ex-spouse uses who we are as a reason to deny us equal parenting.

We can have our children taken from us by the state and be prosecuted for endangering their welfare for who we are.

We are actively denied our First Amendment rights of free exercise of religion if our sacrament happens to be kaneh-bosm or ganja (but not ethanol, ayahuasca, or peyote).

We can be denied medical treatment, like life-saving organ transplants, just for who we are, absent any evidence our marijuana use risks organ rejection (in fact, recent studies suggest THC may help ward off organ rejection) or we are forced to choose to reject who we are in favor of taking much more harmful and toxic pain medications.

We are restricted to only traveling to certain places where our kind are welcomed, using certain routes to avoid profiling by law enforcement agencies who can use who we are as reason to arrest us for endangering the public, even when there is no proof we’ve done so, and to steal our money and possessions, even if they never arrest us for any so-called crime.

We can still be imprisoned and forced into indentured servitude if we venture outside the very narrow bounds of conduct our kind are allowed, like being seen as who we are by the public or by daring to set foot on federal property.

I can understand why many will read all this and just sputter, “But nobody chooses to be black! You’re choosing to smoke pot!” and that, of course, is true. But nobody is born religious; it is foisted upon that person at birth, sometimes, but maintaining that identity as a religious person is an active choice, not an innate characteristic. One chooses to remain Catholic or one can choose to leave the Church. So it is being a cannabis consumer.

So why do we allow legalized bigotry against cannabis consumers, but not Catholics? “What about the children?” may not be the best response in this context, and irrelevant since we’re talking about adult rights. “What about the workplace?” rings hollow when the workplace is hopped up on stimulants, drowsy from antihistamines, hungover from ethanol, and taking multiple 15-minute breaks to dose nicotine. “What about the roadways?” makes no sense when we still allow taverns with parking lots and maintain that up to .08 BAC, we have to prove you were too impaired to drive. “What about public health?” is laughably irrational when we can smoke a cigarette while idling our car at the McDonald’s drive-thru.

Imagine for a moment, now that marriage equality for gays and lesbians is recognized, if that was accepted as legal, but it was illegal for the couple to be seen in public displaying affection. Imagine workplaces could legally choose to discriminate against gay people (and I know this is still true in many places); however, there was now a test all workers would be forced to take that would prove if they were gay. Imagine that having a previous conviction on your record for sodomy, even though it’s legal now, could be used to deny you a job or student financial aid. Imagine being told you can’t buy a gun because you’re gay. Imagine needing a liver transplant, only to be told you need to remain celibate for six months to qualify, because you are gay. Imagine we’re back to having only some states where gay marriage is legal, but this time, gay married people can be arrested and imprisoned in the non-legal-gay-marriage states for merely being gay.

No analogy is absolutely perfect. Sexual orientation is innate, pot smoking is not, but both have a sort of “coming out of the closet” aspect to them. Religion and pot smoking are both lifestyle choices, but pot smoking’s not also a belief system (for most). Blacks, women, LGBT, the disabled, and Native Americans have all suffered far greater injustices than pot smokers, I concede that.

My point was that we may be legal, but we’re far from equal. I’ll use that from now on, if only to avoid having to battle the online outrage machine. 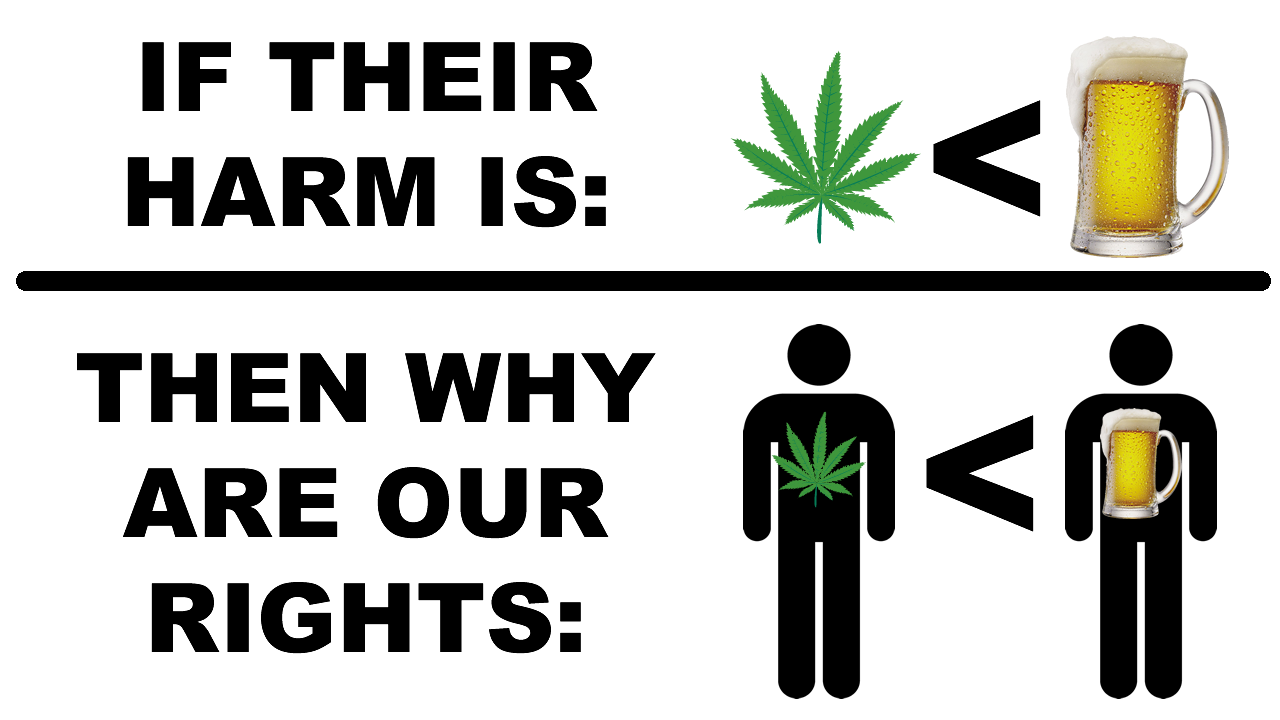