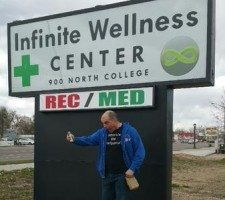 After two days driving across Idaho and Wyoming, where it is illegal to merely be high, my Portland NORML colleague Kaliko and I arrive at Infinite Wellness Center in Fort Collins, Colorado. It is the first legal pot shop you can get to on that route south from Laramie, Wyoming.

Once we enter, I had to immediately use the bathroom, since I’d been driving since Rock Springs, Wyoming. Apparently the bathroom is permitted for use by both medical and recreational customers, thank goodness.

Back into the lobby, a clerk checks my ID and writes my name on a slip of paper along with the words “Non Resident”. See, I only get to buy seven grams because I’m an Oregonian. Coloradoans get to buy twenty-eight grams. “Keep your ID and that paper out,” he told me.

Then as we enter, there is a large rectangular showroom, with glass counters running to the left and right, along each wall, and along the back wall. Running down the middle of the floor was one of those posts-with-seat-belt-ribbons you see to form lines at the airport or at a bank. The sign at the first post read: 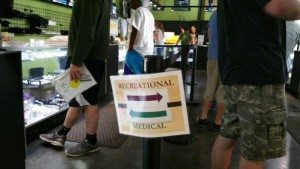 Now that dividing-belt ran to about half the floor, then took a left and ended at the glass counter. Thus, the MEDICAL side comprised about 25% of the shop. There were a couple of people there. On the RECREATIONAL side, it was like waiting on the next checker at the Best Buy.

Standing there watching two patients leisurely chat with their budtenders while my kind queued up for rapid-fire service, I felt a bit like I do at airports when I’m in Boarding Group B and they’re announcing the boarding for Platinum, Diamond, Elite, Ruby, Sapphire, Gold Star customers, uniformed military, families with small children and elderly boarding now.

While in line I struck up a conversation with a guy in the line who happened to have moved here from St. John’s in Portland. The fellow had a terrible stutter, but it couldn’t have been something medical marijuana could help, because he was in the recreational line with me. 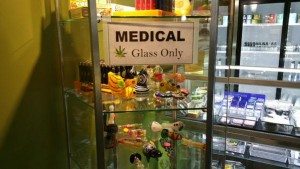 Hmm, I wondered. If someone were to mistakenly smoke some recreational buds out of medical glass, is that like crossing the streams in Ghostbusters? Can my kind even properly and successfully use medical glass, given our robust health? Maybe the carb on medical glass is shaped in such a way that it is easier for arthritics.

Eventually it is my turn and I make my order with my friendly budtender. I’ve grown accustomed to using vapor pens with pre-filled cartridges, so I ordered a cartridge of Durbin Poison (I like my heady sativas) and a couple of pre-rolled joints. “What do you have in pre-rolls,” I asked him. He told me they were “rainbow joints”, a mixture of all of their herbs. Oh, a salad joint, as we’d call it in Portland.

“So how much are the pre-rolls?” Ten bucks apiece. For salad joints.

“Oh, I’m sorry to tell you, dude, that’s a half-gram cartridge. It’s just the way it is; you’d get it cheaper on the medical side.”

Yeah, but my kind aren’t allowed in there. At this point I made the split decision to continue with the ridiculously overpriced transaction just to have the receipt to use for this blog post and future presentations.

I made some small talk as he was ringing everything up, asking him about the medical glass. He made some explanation about it but all I recall from it was something about how the glass couldn’t be on the recreational side because if they had to ask their medical customers to go to the recreational side to buy glass that would be a “disservice”.

“All right,” he continues, “that’ll be ninety-nine seventy-nine.”

Yeah. $99.79 for a half gram cartridge and two salad joints!

Anyway, later I enjoyed some of those recreational products and I’ll be damned if my back ache from driving from Portland to Denver didn’t ease. Maybe somebody mistakenly mixed in something from the medical side into those ten dollar recreational salad joints. They must have, because they sure as hell weren’t getting me very high.

I will be doing everything in my power to ensure that legal marijuana in Portland, Oregon, turns out nothing like this marijuana apartheid.