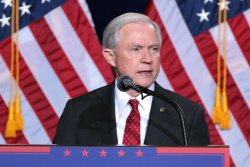 Good news for the 30 million Americans who consume cannabis; your Attorney General has declared that your preference is “less awful” than a heroin habit, although “only slightly.” Jeff Session again betrays his medieval marijuana mindset in a speech given to law enforcement.

The Trump administration has already tried to link the country’s opioid epidemic with marijuana. In reality cannabis consumption has nothing to do with America’s addiction to pharmaceutical opioids, fentanyl, and heroin.

Just the opposite. Mounting evidence shows that use of safe, never-lethal cannabis can reduce, even end, use of addictive and often fatal opioids. The attorney general is aware of this fact, but defiant to the truth.

And I am astonished to hear people suggest that we can solve our heroin crisis by legalizing marijuana – so people can trade one life-wrecking dependency for another that’s only slightly less awful.  Our nation needs to say clearly once again that using drugs will destroy your life.

So, Sessions’ definition of “drugs” includes marijuana and heroin, with little difference between them. He does not appear to include the truly addictive and deadly drugs, cigarettes and alcohol. Matt Novak reports how Jeff Sessions, Anti-Weed Crusader Was a Shill for Big Tobacco. Regarding alcohol, Sessions was furious when former president Obama conceded that marijuana was less dangerous than alcohol:

I have to tell you, I’m heartbroken to see what the president said just a few days ago. It’s stunning to me. I find it beyond comprehension….This is just difficult for me to conceive how the president of the United States could make such a statement as that.

Apparently, Sessions is unaware that alcohol kills tens of thousands of Americans each year while marijuana kills zero.

The attorney general focused on the real drug issue of the day in his law enforcement speech:

Our nation is in the throes of a heroin and opioid epidemic.  Overdose deaths more than tripled between 2010 and 2014.  According to the CDC, about 140 Americans on average now die from a drug overdose each day.  That means every three weeks, we are losing as many American lives to drug overdoses as we lost in the 9/11 attacks.

What Session’s forgot to mention here is that the epidemic of opioid addiction and high number of deaths are the end result of this country’s half-century, trillion-dollar war on drugs. The heavy-handed, lock-em-up approach the AG seeks to revive and amplify is a failed policy, clear as the inscriptions on thousands of new gravestones across the midwest.

In the meantime we can only dream for the day when we get an attorney general “slightly less awful” than Jeff Sessions.