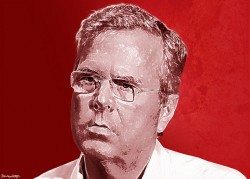 Jeb Bush, the one-time presumed 2016 Republican presidential nominee, has seen better days. His establishment front-runner status was shattered over the summer by the meteoric rise of Donald Trump and, more recently, surging GOP insurgents Ben Carson and Carly Fiorina. After spending the first half of this year raising more than $600,000 per day, Bush’s campaign is in turmoil: Plagued with gaffes, shedding top fundraisers, slashing staff salaries, and national poll numbers that show him statistically tied at third place with names like Huckabee, Kasich, Cruz, and Rubio. Beyond that, Bush looks like a man defeated on the campaign trail. His slumped shoulders, vexed facial expressions, and snippy responses to reporters portray a man very different from the “happy warrior” who once said his decision to run for president would rest on the question, “can I do it joyfully“?

Still, the GOP’s established order is holding out hope that the Republican field will “winnow down” organically, and that insurgent candidates will self-deport over the next few months, leaving Jeb (he likes to go casual, by his first name) to lead the charge against the Democrats’ presumed nominee Hillary Clinton. As a part of our ongoing series examining the 2016 presidential candidates and their views on cannabis and the drug war, we take a close look at Jeb’s record and policy stances to see what yet another American Bush presidency would look like for the cannabis community.

First, make no mistake: Jeb is a drug warrior. By some accounts, he was one of the “best drug warriors in town” during his eight year stint as Florida’s governor. While there he took on the cocaine cartels and oversaw a slight reduction in drug-fueled violence. That’s the shiny part of his governorship; the rest was much more bleak. A vast majority of Governor Bush’s policy stances were indicative of and inspired by the larger failed trends in the war on drugs: He successfully lobbied against a ballot initiative that would have treated nonviolent drug offenders instead of jailing them, he cut funding to treatment centers and drug-courts, he increased mandatory minimum jail sentences for drug-related crimes, and, in 2014, stepped out of term limit-imposed retirement to urge Floridians to vote against an ultimately doomed medical marijuana bill that had, at one point, enjoyed nearly 90% support. That last one he did via scaremongering and slippery slope arguments:

“Florida leaders and citizens have worked for years to make the Sunshine State a world-class location to start or run a business, a family-friendly destination for tourism and a desirable place to raise a family or retire. Allowing large-scale, marijuana operations to take root across Florida, under the guise of using it for medicinal purposes, runs counter to all of these efforts. I strongly urge Floridians to vote against Amendment 2 this November.”

It’s worth taking a look at Jeb’s family in order to put these policy stances in context, particularly the apparent hypocrisy in the treatment his own daughter enjoyed after getting busted for prescription fraud and, later, possession of crack cocaine. In 2002, while Jeb was launching his reelection campaign, his daughter Noelle–who had a history of motor vehicle accidents and “about a dozen” moving violations on her record–was arrested in Tallahassee for attempting to purchase the anti-anxiety medication Xanax with a fake prescription and charged with a felony. Rather than jail-time, a judge sentenced her to a rehabilitation program, during which she was twice jailed for violating the terms of her stay–once for possessing an unspecified prescription medication and then again for possession of crack cocaine, which she hid in her shoe.

Because of the leniency granted her–leniency, by the way, that her father made a career out of fighting against when it came to Floridians not lucky enough to be born with the family name “Bush”–Noelle walked away about a year later with no felony record and now makes appearances with her father at campaign events. “This is a private issue as it relates to my daughter and myself and my wife,” Jeb said at the time of Noelle’s drug woes. “The road to recovery is a rocky one for a lot of people that have this kind of problem.”

Many would agree that non-violent drug offenses are a private issue that should be handled with delicacy and compassion. But compare that to this guy who was sentenced to life in Florida for selling “a handful of crack-cocaine rocks” in 1995, or this (legal) Florida immigrant who was deported after spending six months in jail when found guilty of charges their lawyer states are “almost exactly like those allegedly committed by Noelle Bush,” and it begins to look a lot like Jeb’s drug-crime compassion stopped at the bloodline.

To be fair, Jeb has changed his tune in recent years, especially when it comes to a particularly right-wing flavored brand of sentencing reform. At last year’s Conservative Political Action Conference (CPAC), Jeb joined other “prominent Republicans who once trumpeted tough-on-crime ­stances and now call for sentencing changes and rehabilitation programs for drug and other nonviolent offenders.” He’s also a backer of “Right on Crime,” an advocacy group that “supports constitutionally limited government, individual liberty, personal responsibility and free enterprise,” while focusing on “community-based programs rather than excessive mandatory minimum sentencing policies and prison expansion [and utilizes] free-market and Christian principles…to put their beliefs into practice as an alternative to government-knows-best programs that are failing prisoners and the society into which they are released.”

Jeb himself is an admitted former pot smoker and alleged former hash dealer. When it comes to state-level marijuana legalization efforts, though, his own youthful indiscretions aside (see a pattern here?), he seems conflicted. If “done appropriately,” he says, it’s “more than appropriate.” Hold up, though: “If it’s a step towards legalization of marijuana and open recreational use of it, there ought to be a debate about that before you just kind of step off the cliff because there are significant health consequences of that.” Get that? He’s ok with it (but not in Florida!) as long as it’s done the way he thinks it should be done. Otherwise we should have a debate, which we’re apparently not having. At this year’s CPAC, he reportedly said that state-level marijuana legalization “a bad idea, but [states] ought to have the right to do it.”

Jeb Bush’s history as a governor tells a good deal more about his perspective on marijuana and the drug war than any recent statements. And while he seems to agree with Chris Christie in his belief that medical marijuana is simply a conspiracy, or “front,” for an overall recreational legalization effort, he isn’t yet promising to arrest cannabis users in Colorado and Washington if elected the way the absentee New Jersey governor has. His fellow Floridian Marco Rubio has also promised to “enforce federal law” if he should win the presidency. Yet Jeb falls short of rivals like Carly Fiorina, who is on record stating that her commitment to states’ rights means she would “respect Colorado’s right to do what they did” in legalizing recreational cannabis.

In short, Jeb seems to be what passes as a moderate in Republican circles these days and has the record to prove it. Now if only he could get that pesky Trump out of the way…