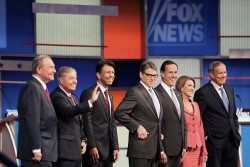 The debate between the bottom-tier GOP candidates who didn’t poll high enough to make FOX News’ Prime Time Trump Spectacular may not have been the biggest ratings draw tonight, but it did provide for some interesting debate and soundbites. South Carolina Senator Lindsey Graham, for example, promised to re-invade Iraq if elected. Failed businesswoman Carly Fiorina proved herself an eloquent, intelligent, and well-versed force to be reckoned with, and tried-once-already Republican presidential candidate Rick Perry promised to take a bottle of Wite-Out to the White House on his very first day.

All raced a game-show buzzer in an attempt to “tap into historic levels of leadership and [inspire] the nation” (as requested by the moderators) in a 60 second soundbite.

One topic that didn’t come up? Cannabis. Even though, as my colleague Romain Bonilla notes in this excellent piece, marijuana legalization (and the drug war in general) is one of the most pressing and relevant issues of our time–touching on hot-button topics like states’ rights and sentencing reform–the GOP runners-up didn’t even mention it. They weren’t asked. Not about marijuana, not about the drug war–there wasn’t even a question about civil liberties, unless you count abortion.

Hopefully the questions posed by the moderators in this debate aren’t an accurate predictive measurement of how the second debate will go. We’ll keep you posted.