Illegal Marijuana’s Gateway Leads Only To The Dealer 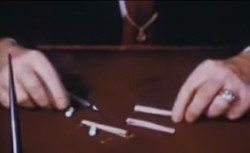 Recently, Wisconsin Gov. Scott Walker repeated tired old clichés about adults who choose to relax with cannabis rather than ethanol. After speaking to the Badger State Sheriffs Association, Gov. Walker told assembled reporters that the sheriffs had urged him not to support “marijuana use legally in the state of Wisconsin” because “they were still very concerned that (marijuana) was a gateway drug.”

Yes, there are still people who believe that choosing to consume cannabis leads a person inexorably to the heroin needle. This scare tactic dates back to the 1950s, when propaganda films showed reefer-toking teens falling prey to the deadly narcotic.

I’ve always found the gateway theory to be a weak marketing tactic – what, the weed is so boring you have to hype it by connecting to something more powerful? It’s like teasing your straight-to-DVD movie with “If you loved the frat-boy hijinks of ‘Animal House’, you’re going to love….” But it has held on for over sixty-five years now because there is a kernel of truth to it. Statistically speaking, the first illegal drug a heroin addict may have tried is likely to be marijuana.

This is where the sheriffs are on the issue. Their job brings them into first contact with people suffering the worst drug addictions. To them – and to much of the public – illegal drug use is just one big scary thing, like air travel. You can show them verifiable statistics that air travel is incredibly safe, but when they see plane crash after plane crash, they don’t think about the issue rationally. To them, an overdose death of a heroin addict is a plane crash and smoking marijuana is air travel. Yeah, it’s incredibly unlikely any one plane trip is going to lead to a crash, but you’ll never die in a plane crash if you never take a flight, right?

Their blind spot, of course, is that they’re only considering air travel and ignoring the fact the land travel they engage in every day is immensely more dangerous. The cars, in this stretched metaphor, would be ethanol use, or good old fashioned booze. The only sure way to avoid a car crash would be never to ride in one, right? Yet most people who are terrified of air travel think nothing of driving a car and would never warn someone else not to drive one. They’re the people who are terrified that there are “more dispensaries than Starbucks!” who are seemingly unconcerned that there are buildings with parking lots in every city’s downtown district where people go inside for the express purpose of enjoying a drug that is guaranteed to significantly increase their crash risk. Nobody ever seriously proposes that adults should never drink alcohol, especially in Wisconsin, but Gov. Walker supports locking up adults who choose a far safer recreational choice of marijuana?

Whenever I’m talking with someone who brings up the gateway theory, I ask them if they ever rode a bicycle as a kid. Almost everyone has, so I follow up by telling them that I used to play music in outlaw biker bars. When I talked with these guys in motorcycle gangs, almost every one of them told me they started out on a bicycle. So, clearly, riding bicycles is a gateway to the Hell’s Angels? No, it’s just that riding bicycles is a common first step in the progression that leads to motorcycle riding. It doesn’t mean all bicyclists are going to ride motorcycles or even that all motorcyclists are going to join biker gangs. Actually, most bicyclists never go on to ride motorcycles, just as most marijuana consumers never go on to use other drugs.

The Institute of Medicine back in 1999 put the gateway theory to rest, explaining that “In fact, most drug users do not begin their drug use with marijuana–they begin with alcohol and nicotine, usually when they are too young to do so legally… There is no evidence that marijuana serves as a stepping stone on the basis of its particular physiological effect.” Numerous follow-up studies have verified these facts.

But there is a gateway that exists for marijuana and that is to the illegal drug marketplace. There’s a reason they don’t call alcohol a gateway drug to heroin, even though far more heroin addicts have tried it than marijuana. It’s because there’s no cocaine on the grocery store shelf next the beer and there’s no heroin on the liquor store shelf next to the tequila. Marijuana’s only a gateway to illegal drugs by virtue of using the word “illegal” to describe it. Regulate marijuana and place it in adults-only stores where only marijuana is sold and identification is checked and you’ve taken away any marketing opportunity for a drug dealer to push something harder to his weed customers.