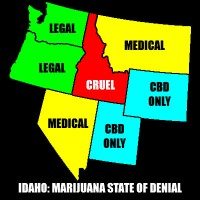 “Idaho Is What America Was“ is a statement of pride for citizens of the Gem State who treasure pristine wilderness, Christian values, and conservative politics. Unfortunately, the statement also represents a stubborn clinging to America’s marijuana prohibition that not only defies logic, but defies a simple human compassion for suffering children that all of Idaho’s neighbors have come to recognize.

It was announced last week that 25 children suffering severe epilepsy in Idaho may begin clinical trials this week with the GW Pharmaceuticals drug called Epidiolex, thanks to an executive order from Gov. Butch Otter. GW’s drug is a cannabidiol (CBD) product meant to mimic the substantial success many parents have seen from treating their children with natural, whole-plant cannabis-derived CBD oil in places like Colorado.

However, Epidiolex is truly CBD-only, with no psychoactive THC whatsoever. Most parents using CBD oils in the states that allow them are granted anywhere from 0.3 percent to 5 percent THC in the oil. Many parents find that CBD oil without higher levels of THC doesn’t produce the relief from seizures their children require.

Twenty-five children, out of a possible 1,500 who could qualify in Idaho, will be granted this opportunity to end their suffering. To be one of the 25, the epileptic child must have already tried four other ineffective pharmaceutical medications. Some of the side effects from these medications include: nausea, vomiting, dizziness, drowsiness, constipation, dry mouth, unsteadiness, mouth sores, swollen lymph nodes, persistent vomiting, severe stomach/abdominal pain, yellowing eyes/skin, dark urine, change in the amount of urine, persistent or severe headache, fainting, fast/slow/irregular heartbeat, unusual eye movements (nystagmus), vision changes (such as blurred vision), joint pain, swelling of the ankles/feet, pain/redness/swelling of the arms or legs, numbness/tingling of the hands/feet, sun sensitivity, signs of low levels of sodium in the blood (such as persistent nausea, extreme drowsiness, mental/mood changes including confusion, seizures), depression, suicidal thoughts/attempts, other mental/mood problems, symptoms of a serious allergic reaction, including rash, itching/swelling (especially of the face/tongue/throat), severe dizziness, or trouble breathing.

That’s the list of possible side effects from just one epilepsy medication. So Gov. Butch Otter wants to make sure that the child takes three more of those medications before we try the Big Pharma version of the no-THC-allowed, non-toxic, non-psychoactive oil from a plant?

The executive order from Gov. Otter came after his veto last April of a medical marijuana bill that had passed both houses of the Idaho legislature with tremendous support. Idaho’s Senate had voted 29-5 just two years’ prior on a resolution that the senate is opposed “to efforts to legalize marijuana for any purpose,” including what they referred to as “a ‘medical’ marijuana initiative”. Yet the almost identical Idaho Senate voted 22-12 to approve of limited-medical use of CBD oil for epileptic kids.

Otter’s veto of CBD-only legislation was the first of its kind. CBD-only laws began in neighboring Utah in 2014, then spread rapidly to similarly religious, rural, and conservative states like Iowa and the entire South. With Wyoming’s recent adoption of a CBD-only law, Idaho finds itself surrounded on the west by fully legal states (Oregon & Washington), to the south and east by medical marijuana states (Nevada & Montana) and CBD-only states (Utah & Wyoming), and to the north by Canada, which has medical marijuana and, thanks to the recent majority win by the Liberal Party, likely legal marijuana soon.

And that’s just fine with Idaho’s drug czar. “Idahoans are not afraid of being different than their neighbors,” Elisha Figueroa, director of Gov. Otter’s Office of Drug Policy told the Spokesman-Review. “I think that they are wanting to protect their way of life.” 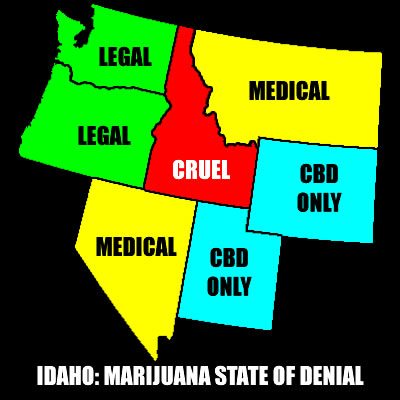 What way of life was protected when Gov. Otter vetoed a CBD-only law and instead allowed just 25 children of 1,500 to receive life-saving treatment with Big Pharma’s version of CBD oil? According to his veto statement, “there were too many questions and problems” with the bill. “Of course I sympathize with the heartbreaking dilemma facing some families trying to cope with the debilitating impacts of disease,” Gov. Otter explained, “[but the bill] asks us to look past the potential of misuse and abuse with criminal intent.”

Yes, we all know what a den of iniquity Utah became after it legalized a cannabis oil that cannot get anybody high last year. Can Gov. Otter seriously believe that desperate parents giving their epileptic kids a dose of non-psychoactive cannabis oil is the slippery slope that leads to teenagers doing bong rips while they speed down the freeway on the way to their heroin dealer’s house?