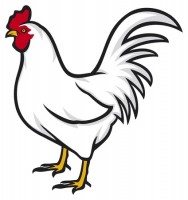 Tonight, I completed my appearance at the Idaho Marijuana Town Hall (where the anti-legalization side chickened out at the last moment). I sent out notice on social media about our more than 8,000 listeners on the live stream, and re-shared my article from earlier today in which I called Idaho’s Drug Czar and the Idaho State Police “chicken”.

That ended at about 9:30pm. My host drove my co-speaker Inge Fryklund and I to a Del Taco for late night eats, then we dropped her off. I got here to my room at a budget inn (literally “Budget Inn”) around 10:30pm. I turned up the heat, got into some sweats, and turned on the TV while I processed photos and audio from the days’ events.

I go to the peephole and there’s some woman in a drab coat and some dude standing just off the edge of where I can see. “Who is it?” I ask.

“Beep beep! Could you open the door?” the man says.

I can’t hear, because Billy Ocean’s beautiful voice is between me and the door, “Who?” I ask as I’m fumbling for the unfamiliar remote’s mute button.

I’m thinking, why the hell are reps from British Petroleum at my door? “No, I won’t open the door.” I get the TV muted. “Who are you?”

“Probation and Parole,” the man proclaims, “Why won’t you open the door?”

Holy shit! “Why are you bothering me,” I answer angrily. “I am neither on probation nor parole.”

“We have a female parolee who is registered to this room here,” the man says, “can you just open the door?”

“There is nobody here but me,” I reply, “and you can check with the front desk that I’ve been registered in this room since morning.”

“Sir, why won’t you open the door so we can just check that she’s not here?” the woman says.

“Why won’t you go get a warrant? I’m not the person you’re looking for and nobody else is in here,” I tell her.

Obviously frustrated, the male says, “Look, we know you’re smoking pot in there, and that’s your personal business and we don’t care. But we’ve got other probationers staying here and we don’t want to see you fuck it up for them, so go take that shit somewhere else.”

Right. It’s 11:30pm and I’m going to go door-to-door by myself looking to get some strangers on probation to smoke pot with me.

“Whatever,” I reply, “come back with a warrant or leave me the fuck alone.”

And I watched them through the peephole as they turned and walked away.

I’m somewhere between pissed off and terrified. It’s now approaching midnight and there is no way I’m going to be able to sleep, wondering if the next POUND POUND POUND POUND I hear at 2am is accompanied by a warrant.

Unless you’re in Idaho (or Wyoming or New Jersey) where they have misdemeanor penalties for being under the influence of marijuana, absent any actual possession.

There is really only one person here at the Budget Inn who would have any idea I smelled like pot, and that’s the guy who checked me in. Nobody here is awake and shuffling about after 10pm on a Tuesday night. The mostly empty parking lot would suggest there aren’t many people staying here tonight. I didn’t see the lights on in any rooms I passed on my way here.

So… does night front desk guy call cops when he smells a pothead checking in? Did police follow me and my host here to the motel to know where I was checking in to? Did somebody not like me reading from their website’s hilarious late-90’s-drug-cop-sourced anti-marijuana legalization position paper live to over 8,000 listeners, a crowd of 100 or more, and two representatives of the local media?

Whatever it is, it is a stark reminder of why I left behind my friends, family, and birthplace thirteen years ago. And why people who want legalization in Idaho are so afraid to speak up for it.

Hey, Idaho State Police and Boise's "Probation and Parole" cops that pounded on my motel room door at 11:25pm… I took that shit somewhere else, and the tax revenue and jobs, too.