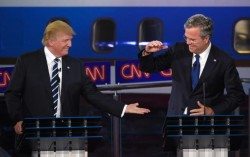 I thoroughly enjoyed last night’s Republican Presidential Debate. There was an obese governor from Arkansas calling for a cure for heart disease that isn’t cutting down on the Chick-fil-A.

There was governor after governor telling 54% of last election’s voters how proud they are of de-funding the Planned Parenthood clinics where they go for routine pap smears and breast cancer screenings.

There was the Florida senator who insisted that the world is a dangerous place and the president needs to be ready on Day 1.

There was the brother of the president whose administration’s Day 234 featured the worst attack on American soil in history, despite being warned about that on Day 198.

There was the megalomaniac who had the best line of the night, rebuffing the brother of the former president who crashed the worldwide economy, “Your brother brought us Barack Obama because [his administration] was such a disaster those last three months that Abraham Lincoln couldn’t have been elected.” The brother replied that his brother “kept us safe”, apparently referring to Day 235 and beyond if you’re not a black person in New Orleans.

But the section of the debate that has us all talking in the marijuana reform world is the back-and-forth between the Kentucky senator and the New Jersey governor over the 10th Amendment and its application to marijuana legalization in the states. As VICE News reports:

“Governor Christie would go into Colorado, and if you’re breaking any federal law on marijuana, even though the state law allows it, he would put you in jail,” Paul said. “If a young mother is trying to give her child cannabis oil for medical marijuana for seizure treatment, he would put her in jail if it violates federal law.”

Christie tried deflecting this suggestion — “I’m not against medical marijuana. We do it in New Jersey,” he said — but Paul countered that the enforcement of federal cannabis laws means the threat of jail time for all users, since no federal provision for medical marijuana exists.

But within that exchange was the core political problem with the recent spate of CBD-only medical marijuana laws that have passed in 15 states, mostly in the South, and no-home-grow or no-whole-plant medical marijuana laws passed recently in the East. They provide a rhetorical shield against the most powerful attack we have against marijuana prohibition, the suffering of patients who use cannabinoid medicines.

Chris Christie gets to say something that is factually true – New Jersey does allow “a young mother… trying to give her child cannabis oil for medical marijuana for seizure treatment”. Not if she wants to attend school and use her non-psychoactive medicine at school like the kids on Adderall get to do. But he still gets a bit of cover from Rand Paul’s attack, as do the opponents of expanding medical marijuana in Florida or any other state with a CBD-only law.

Furthermore, they get to turn the attack back against the marijuana supporter, as CelebStoner reports:

CBD-only and no-home-grow and no-plant medical marijuana laws allow people like Chris Christie to say they support the truly medically needy, since what they approve of isn’t the growing of marijuana plants that healthy people harvest to get high.

Thanks to these kinds of laws, the “you support letting epileptics suffer” attack has no bite anymore. Even in a red state without any sort of marijuana reform, the opponents of legalization are becoming willing to cleave away that sympathy-for-the-sick-but-hate-potheads vote away from full legalization.

The political attack Rand Paul used – the 10th Amendment – is a good one to use on conservatives who consistently want the government out of our affairs, unless the affairs concern our health care choices. Government-run healthcare is a terrible idea to today’s GOP, but government dictating which medical procedures and medicinal herbs we may use sure isn’t.

The attack just needs to stick with Rand Paul’s first sentence about smoking a joint in Colorado – over two-thirds of GOP voters in the early primary states agree with Paul. Don’t give Chris Christie wiggle room to deflect it to medical marijuana.