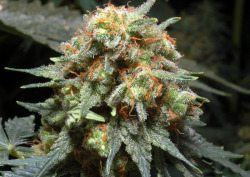 Good pot is good pot, whatever you call it.   That being said,  who is in charge of naming the strains?  Do growers and cultivators even think about what they name these things?  I know a guy who had a strain he developed for years. It was fantastic. I asked him what he had named it and he said. “Purple Retard”.  I just kind of stared at him for a while. Then he told me, “This strain has been crossed and back-crossed so many times, it’s retarded”.  I got the joke, but I still found the name more than a little insensitive. And  that’s probably my biggest  problem with these things. Your pot is great but your name sucks.  Here are some more examples:

We get it. If you mash up the word “Herer” (as in Jack Herer, marijuana demigod) and the word “marijuana” , you can come up with the word “Herojuana”.  How clever. Too bad the name of your strain makes it sound like you mixed heroin and marijuana together.  Does anyone do that? Plus, why are you trying to get all the prohibitionists riled up?  We have been telling them for years that contrary to what they have been led to believe, marijuana is safer and less addictive than heroin (Because it is). But now you go and name a strain “Herojuana”?  For shame, because Herojuana is a great Indica with hella soothing effects.  Oh, and unlike heroin, if you smoke too much, it won’t kill you. 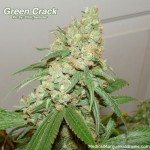 Same deal. Too clever by half. We get it:  “This stuff is like crack”  usually means that something is tasty and enjoyable and you can’t stop doing it.  So in that regard, the label “green crack” is two out of three.  Super Tasty. Hella Enjoyable. Addictive? No.  And why would you want to liken marijuana to crack anyway?  I have seen it listed as “Green Candy” in more and more clubs, so I guess some people are starting to come around.

this isn’t even a real strain.  It’s a description of the way  “Pineapple Express” smells. “Pineapple Express” isn’t a real name either.They made up the name for the Seth Rogan movie.  I guess it is a real name now because some growers will take a good strain that wasn’t selling and give it a hot new name to rook the newbies.  This practice has got to stop.  Although I did smoke something called  “Pineapple Euphoria” in Oregon once. It was really good.

Sigh. Guns? really?  Whatever happened to the hippie ideals, man?  Great sativa dominant strain that has been around since the 90’s.  AK-47 is also very easy to grow, and it flowers fast.  They say it can be ready in as little as 47 days.  Maybe not that fast, but you get the point.

Did the grower even know what MK-Ultra was when they named this strain?  Why on earth would you name a strain after an insidious CIA sponsored program dedicated to performing mind control experiments? I have no idea if this strain’s any good or not. I am too afraid to smoke it.