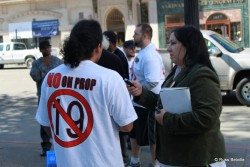 Once upon a time, marijuana legalization was proposed in a state. Most of the people saw it, and it was good. But the police, the prison guards, the drug testers, and the rehabbers saw it, and it was a vision heralding the demise of their way of life.

And one other group saw it and agreed with the cops. Ironically, they consisted of people whom the police, the prison guards, the drug testers, and the rehabbers make their living on.

These Stoners Against Legalization are a varied group, to be sure. At the top are the rent seekers, illegal growers and dealers who, like the first group, see the demise of their easy profits in legalization. A simple, unsupervised, unlicensed, untaxed, unregulated lifestyle coming to an end and marijuana becoming like any other commodity that requires legitimate business acumen, not just tolerance for criminal risk.

Below them are the Fundamentalist Legalizers and the Anarchists, sometimes one and the same. The True Believers always can tell you why the proposed state legalization will be far worse than the current prohibition that condemns 700,000 annually to criminal records.

In 2010 California, it was that a 5×5 garden was too small and would enable an Oakland marijuana monopoly. Better to wait for 2012’s True Legalization. They’re still waiting six years later.

In 2014 Oregon, it was that the liquor commission would be in charge and $35/ounce tax was too much for grows. We’ll see.

And in 2015 Ohio, it is that ten growers get rich, as if the market wouldn’t have been dominated by a few large players anyway. In 2016 California, it will be that it doesn’t protect the family growers in Humboldt, or that the tax is too much, or they didn’t call it “cannabis”, or that it didn’t declare Jack Herer’s birthday a holiday or some such trifle. There will always be an excuse to maintain prohibition for the Fundamentalist Legalizers.

Then, the Anarchists, who instinctively hate anything resembling the politics that actually makes change happen, latch on to the psuedo-analysis of the True Believers, sprinkling in some conspiracy theory along the way (“how much are they paying you to support fake legalization?”) Before long, some of the young people who’d benefit most from the proposed legalization become the loudest voices against it.

Fortunately, the Stoners Against Legalization have as much pull in politics as Pluto does on our ocean tides. California was sunk by Schwarzenegger’s surprise decrim and Prop 19’s lack of national backing, not Dragonfly de la Luz. Washington passed despite the ravings of Steve Sarich. Oregon passed despite the extremists on my Oregon policy email list’s hatred of it.

As for Ohio? That was a tough bet without a controversial constitutional amendment. It may well fail, and if it does, I wouldn’t bet on Ohio voting on anything for all marijuana consumers before 2020.

Stoners Against Legalization. Voting with the drug warriors and fighting to keep you and me and themselves criminal since 2010.