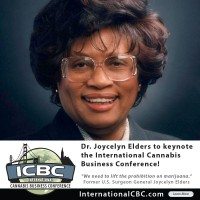 Former Surgeon General Joycelyn Elders has been a pioneering and historic political figure in many regards. The first African American Surgeon General made many headlines during her tenure under the Bill Clinton Administration, as she was certainly one to speak her mind, even if the rest of the world wasn’t quite ready to hear it. While many political figures and policymakers play it safe, Elders was calling upon the United States government to rethink the Drug War back in 1993, three years before California had even passed the nation’s first medical cannabis law.

The momentum for cannabis law reform is so great today, with a strong majority of Americans supporting marijuana legalization and a supermajority supporting medical use, that sometimes it is hard for many advocates, especially those new to the movement, to remember a time before any state had passed a medical marijuana law. However, there was a time when we needed brave public figures to take courageous stands against the Drug War and one of those people was Joycelyn Elders. It would have been nice if President Clinton and his administration officials had offered more support for Elders during her tenure, but not every influential policymaker is as political courageous as Elders.

In 2010, when California was changing the marijuana debate once again, this time on legalization for all adults, Elders was a leader once again, proclaiming her support for the Golden State’s legalization proposal. “We need to lift the prohibition on marijuana,” Elders told The New York Times. “We have the highest number of people in the world being criminalized, many for non-violent crimes related to marijuana,” Elders told CNN. “We can use our resources so much better.”

Dr. Joycelyn Elders will be making yet another historic stand, this time as a keynote speaker at the International Cannabis Business Conference (ICBC) in San Francisco on February 13-14th. The timing of Elders’ keynote address is crucial when the current Surgeon General Vivek Murthy has recently called for a review of our nation’s drug laws and California and several other states look to improve their marijuana laws on the 2016 ballot.

Attendees of the ICBC will hear from Elders and many other great speakers, such as renowned blogger Andrew Sullivan, cannabis icon Tommy Chong and Arjan Roskam, founder of the Green House Coffeeshops and Green House Seed Company in Amsterdam. As one of the organizers of this conference, I am extremely excited to meet and hear from Dr. Elders. The ICBC was already going to be a great conference, and Elders keynote makes the ICBC as truly historic event.

Full press release from the ICBC:

Andrew Sullivan, Tommy Chong and Arjan Roskam among other speakers

“Business and Politics” is the theme of the conference, which comes as several legalization initiatives vie for a spot on the state’s November ballot.

California has a $1.3 billion marijuana market, the largest in the U.S., and legal marijuana is the fastest growing industry in the country, according to The ArcView Group, a cannabis industry investment and research firm. Newly-passed medical regulations are transforming the state’s industry, and San Francisco has begun crafting recreational rules in anticipation of full legalization.

“The industry is exploding,” said conference producer Alex Rogers. “California is already a world leader in medical cannabis commerce. Imagine how big it’ll be once it’s legal for adult use.”

Unlike consumer-focused conferences like the Cannabis Cup, the International Cannabis Business Conference focuses on business strategy and influencers. It’s designed to be a crash course for entrepreneurs who want to grow business not only in California but also nationally and internationally.

Many of the speakers are from outside the country. Panel topics include legal, banking and tax issues; fundraising and marketing; and California’s new regulations. Earlybird tickets cost $499, and the event is likely to sell out.

Elders, the conference headliner, was the first African American appointed as Surgeon General of the United States. She came out in support of marijuana legalization in 2010, long before 58 percent of Americans supported it.