Flying High: The Ins and Outs of Traveling the Friendly Skies with Weed 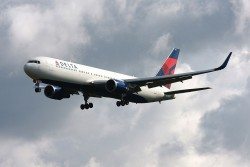 Can you carry your medical marijuana (or your recreational marijuana) on a commercial airplane? I do. It’s usually not a big deal.  Over the past 20-plus years of bringing weed with me dang near everywhere I go, I have had no real problems.

There are two ways to carry your marijuana in an airport: In your pocket and in your luggage. I suppose there are more than two ways, but most of the other ways are kinda gross. In the days before 9/11 (and before California had a medical-marijuana law), I would just put my stash in my pocket, make sure I had no metal objects on my person, so as to not set off the metal detectors, and breeze right through the machine. No problems.

Nowadays, with the new backscatter machines being able to detect that fat sack in your pants (heh), that method isn’t so foolproof. Last year, I got caught (by the backscatter machine!) with a small amount of cannabis and a pipe while flying from Spokane, Washington, to California, and the Transportation Security Administration agent didn’t bat an eye. I told him it was medical cannabis, and he said to me, “Well, that’s not going to affect the safety of the plane in any way.” I agreed with him that I posed no risk, and he sent me on my merry way.

When it comes to putting the weed in your luggage, make sure you have your letter of recommendation next to your meds. A friend of mine was flying from Oakland to Los Angeles with some cannabis flowers and a variety of hashish samples in his suitcase. Security found it and called him into the office. The sheriff there told him they had found his stash, noted that he had his letter of recommendation and that everything seemed to be in good order. My friend kept his cannabis and made his flight. I have also placed weed in my carry-on bag, accidentally left some in my sport coat and sent it through the X-ray machine (do X-rays harm weed?). And way back in the day, I would carry it in my shoes. Can’t do that one anymore.

While the airport is technically federal property, and it is in fact illegal to carry cannabis across state lines,  the TSA doesn’t really care about small amounts of weed. Its official policy is to allow local law enforcement to deal with people found carrying small amounts of pot in an airport. Local law enforcement in states with medical-marijuana laws generally won’t do anything if you have your medical-cannabis patient paperwork. In states with legal marijuana, it’s a little different.

The authorities are doing their best to prevent weed from leaving their state so other states don’t get upset. Even so, being caught with a small amount of pot at the Denver airport carries a first time fine of $150, although they haven’t fined anyone yet. They just confiscate the stash.  In Washington, they will turn you over to the real cops if you have more than an ounce.   The bottom line is, if you are carrying a small amount of cannabis, you most likely won’t encounter any real problems.

(This piece is for entertainment purposes only, please consult with your own attorney for legal advice.)