Florida Amendment 2 marijuana legislation is in the news and some cities and counties are taking a Well, ‘Not Yet,’ Anyway attitude as they wait to see what happens in the state of Florida.

Since the late twentieth century, over half of the states in the U.S. passed initiatives that either decriminalized or legalized marijuana for various purposes.  With each election, more and more voters head to the polls to vote upon marijuana measures.  In fact during the 2016 election, 9 states considered proposals for expanded access to marijuana, both for recreational and medical use.  Florida, one of these 9 states, voted upon broadening access to medical marijuana through an amendment to their state constitution, known as Florida Amendment 2.  Florida’s citizens overwhelmingly supported the measure with 71% of the vote.  So now that Floridians enacted Amendment 2, what happens next?  Florida’s state and local governments must get to work.

Prior to the November election, a limited medical marijuana law existed in the state of Florida.  Essentially patients with extreme medical conditions could purchase and use either the weakest (low THC level) or non-smoked forms of marijuana through a prescription from their doctors.  Conditions covered by the 2014 law included cancer, epilepsy, chronic seizures, and chronic muscle spasms.  The law then expanded earlier in 2016 to include the treatment of patients suffering from terminal conditions with stronger (higher THC level) marijuana. 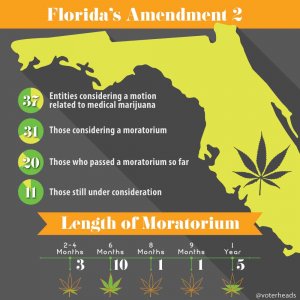 With the passage of Amendment 2, access to medical marijuana for Floridians broadened even further.  Individuals suffering from “debilitating medical conditions” can now take medical marijuana if it has been proven to help alleviate symptoms and their physician believes the benefits outweigh the risks of beginning a marijuana regimen.  This means that Florida will need more dispensaries for marijuana, as the number of patients using the drug for medical purposes is expected to dramatically increase.  The amendment tasks the state’s Department of Health and the legislature with developing rules and regulations for ensuring that marijuana is only given to patients with a proven need, and not end up in the hands of individuals without approved medical conditions.  The amendment provides 6 months for the development of regulations and procedures, and asks that prescription identification cards for accessing medical marijuana be available within 9 months of the November election.

The necessary processes and regulations for medical marijuana distribution vary.  The legislature must consider how to regulate who receives medical marijuana identification cards, how to ensure that those cards come from licensed, trained physicians, and how to conduct background checks to make sure that people buying marijuana are actual patients or their identified caregivers.  Additionally, the amendment requires the regulation of new dispensaries throughout the state, including the proper location of such businesses and the security required for them.  This aspect is the primary place where local governments come in.  They must determine how and where the new dispensaries will be located within their districts so as to effectively provide medical marijuana, but also limit the risk of marijuana being sold to the wrong people.

So how have local governments addressed these considerations so far?  Many cities and counties decided to place temporary moratoriums on the development of medical marijuana facilities in their areas.  Isn’t that going against the amendment, you might ask?  Well considering the fact that the amendment did not provide specifics on actually offering medical marijuana to a broader section of the public, many local governments feel they must wait to see what the state does first before trying to establish medical marijuana dispensaries in their districts.  Thus the moratoriums represent no more than a holding position for local entities as they figure out the best way to implement the new law.

The Intent of Florida Amendment 2

The intent of Florida Amendment 2 is clear: expand access to medical marijuana for debilitating medical conditions in a safe and efficient way.  Due to the fact that the amendment passed with a strong majority, the legislature and Department of Health appear to be moving quickly to develop the necessary regulations and processes needed to put the law into practice.  Many local governments will enact their own ordinances once they know the nature of these regulations, and the combined efforts of state and local governments will hopefully provide relief to many of Florida’s medically ill constituents.

Want to keep tabs on marijuana legislation and other topics you’re passionate about in your community?  Sign up for a free account at www.Voterheads.com.
Author Karl McCollester