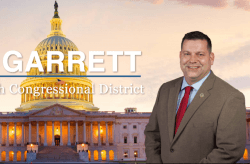 H.R.1227, the Ending Federal Marijuana Prohibition Act of 2017, has been introduced and is gaining cosponsors in the House of Representatives.

This bill would end decades of “unreasonable, arbitrary, and capricious” federal criminalization of cannabis. The legislation was sponsored by Virginia Representative Tom Garrett, a freshman republican in the state’s 5th district. Joining from across the aisle, is Tulsi Gabbard, D-Hawaii, an original cosponsor. Another original cosponsor is Scott Taylor, also a freshman republican from Virginia.

The legislation would remove marijuana from the Controlled Substance Act and classify it with alcohol and tobacco, essentially the same as Bernie Sander’s proposed legislation in the last congress. Although cannabis presents none of the dangers of these two deadly substances, this classification is still a good regulatory home for marijuana. Free, free at last from the clutches of the DEA.

Marijuana policies would be managed by states with their own state laws, as should have been done all along. Banking and tax issues (280E) that have hindered cannabis industry would disappear.

The bad news is the legislation will likely be blocked by longtime anti-cannabis crusaders Rep. Bob Goodlatte (R-Virginia), and Rep. Greg Walden, who unfortunately head, respectively, the House Committee on the Judiciary and the House Energy and Commerce Committee. These men alone get to make the decision as to whether a bill makes it out of committee and into the full House. Without their consent, the legislation dies in their hands, the probably fate of this sensible bill.

This occurred last congress in the senate where Judiciary Committee Chairman Chuck Grassley kept the cannabis rescheduling bill, CARERS, from going anywhere, despite its many cosponsors.

It is difficult to see how any cannabis law reform legislation will every make it into even a vote in congress, as long as marijuana dinosaurs like Goodlatte and Grassley control judiciary committees.

An excellent way to send your support for this timely legislation is to sign Oregon activist Russ Belville’s petition, Tell Congress to Let States Decide Their Own Marijuana Policies. The wonderfully worded petition will be sent to Rep. Tom Garrett, who could use your encouragement, and to Goodlatte and Walden, who need your prodding.