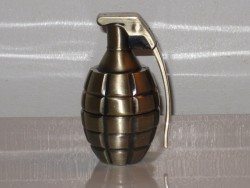 Our semi-regular feature in which we examine the biggest fails in the cannabis community. Be smart when you smoke. Don’t be that stoner.

Pop quiz, Hotshot: You’re planning a trip that involves traveling by commercial air and you want to take your marijuana with you. Do you, A.) Pack a discrete disposable item like, say, a hash pen in your carry-on, B.) Smush some flower in a jar of peanut butter (or raspberry jam) and hide it in your checked luggage, C.) Realize that what you want to do is totally illegal and most likely not worth the risk of not arriving at your location, and catching a felony charge to boot, or D.) Simply throw your hand grenade replica grinder full of ground-up green stuff in your backpack?

The only foolproof answer here is obviously C. And, while A may seem like a good option, well, that’s a cost-benefit analysis you’ll have to make. A personal decision, I suppose. B is a trend from a few years back that almost never ended well for would-be smugglers, and D…well, damn. Who would even consider it, right? As you might have guessed, some brilliant traveler attempting to depart from Sacramento sure did, and the TSA busted them for it. To add insult to injury, they threw up a photo of the grenade-grinder to their highly entertaining Instagram feed for the whole world to see, with this gentle reminder:

“Anything resembling a grenade is prohibited in both carry-on and checked baggage. Especially if it’s a grenade shaped grinder with marijuana inside. This grenade-shaped grinder was discovered in a carry-on bag at Sacramento International Airport (SMF).”

#TSATravelTips – Anything resembling a grenade is prohibited in both carry-on and checked baggage. Especially if it’s a grenade shaped grinder with marijuana inside. This grenade-shaped grinder was discovered in a carry-on bag at Sacramento International Airport (SMF).

The TSA claims to not search for weed (or other drugs) when examining luggage. Created in the wake of the 9/11 terrorist attacks, their stated mission is to “prevent similar attacks in the future…[and strengthen] our transportation systems while ensuring the freedom of movement for people and commerce.” They say plainly that “TSA security officers do not search for marijuana or other drugs.” BUT, “In the event a substance that appears to be marijuana is observed during security screening, TSA will refer the matter to a law enforcement officer. Whether or not marijuana is considered legal under local law is not relevant to TSA screening because TSA is governed by federal law. Federal law provides no basis to treat medical marijuana any differently than non-medical marijuana.”

Don’t smuggle cannabis.
If you absolutely must smuggle cannabis, don’t hide it in A GRINDER DESIGNED TO LOOK LIKE A HAND GRENADE. You WILL get busted.
Buy your weed when you get to your destination.