Don’t Be THAT Stoner: Paranoid Would-Be Marijuana Traffickers Call 911…on Themselves

Introducing our new semi-regular feature in which we examine the biggest fails in the cannabis community. Be smart when you smoke. Don’t be that stoner.

We’ve all been there–chilling on the couch, hitting that bong maybe just a little too hard, when paranoia rears its ugly head. What was that sound? My landlord creeping up on me for a surprise inspection? And, why is my cat giving me that look? Does it want to kill me? Answers, respectively: Probably not, and maybe. Most experienced smokers take it in stride. And, really, if you smoke the right strain you should rarely–if ever–have to deal with it. But these two self-professed “dumb-asses” and aspiring black market marijuana traffickers took paranoia to the next level when they stopped next to an Applebee’s in Idaho, and called the cops on themselves for hauling 20 pounds of marijuana over the Nevada border. Recently released transcripts from the 911 call add a lot of color to the 2015 story. 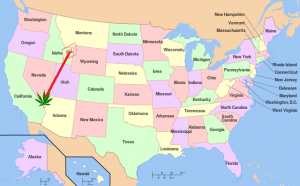 It goes something like this: Twenty-something dudes Leland Ayala-Dolient and Holland Sward had big dreams of smuggling a lot of pot from Las Vegas to Montana, and all was apparently going to plan until that chronic they had been hauling (and, according to the authorities, smoking) got to their heads with paranoid delusions of unmarked cop cars creeping on them. In a masterstroke of genius, Ayala-Doliente decided to pull off the highway and call 911 in an effort to get the cops off their trail. Complaining about the unmarked “jack wagons” and cold outdoor temperatures, he mellowly explained the situation to the dispatcher:

“Hi, we’re the two dumb-asses that got caught trying to bring some stuff through your border and all your cops are just driving around us like a bunch of jack wagons and I’d just like you guys to end it. If you could help me out with that, we would just like to get on with it..We kind of got spooked here trying to bring some stuff across your Idaho border. A bunch of your cops are driving around in a bunch of civilian cars not wanting to pick us up. I don’t know what’s the deal. I was just wondering if you could help us out and just end it.”

The dispatcher, like a boss, calmly and effectively talked Ayala-Doliente down and convinced him to provide his full name and location, promising to send a marked car his way to take care of the problem. When asked if he had any weapons on him, The stoned would-be trafficker admitted that he didn’t, “just a bunch of snacks and stuff.”

East Idaho News reports that both men were charged with felony possession of trafficking marijuana. You can watch the report, including the 911 audio transcript, below in its entirety.

Sward pleaded guilty to possession with intent to deliver, amended down from an original charge.

Sward was given a five-year sentence to prison. District Judge Greg Moeller suspended the judgment and placed Sward on probation for five years and ordered him to serve 30 days in jail.

Ayala-Doliente was sentenced to 1 1/2 to eight years in prison. Moeller increased the sentence after Ayala-Doliente tested positive for marijuana, cocaine and oxycodone on his sentencing day.