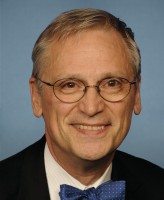 Congressman Earl Blumenauer (D-Ore.) was the first elected official when he (rightly) called for the removal of DEA Chief Chuck Rosenberg on the House floor, but he certainly wasn’t the last. True to his history, Rep. Blumenauer not only has demonstrated great leadership, but also the ability to garner bipartisan support for sensible reform as Congressman Dana Rohrabacher, a Republican representing Orange County, California, signed onto a letter calling for the removal of the head of the DEA.

Rosenberg started receiving calls for his removal after he insultingly called medical marijuana a “joke” to reporters last week. The Huffington Post reported:

“Rosenberg is clearly not the right fit for the DEA in this administration,” Blumenauer said during a speech on the House floor Wednesday morning.

“What is a joke is the job Rosenberg is doing as acting DEA administrator,” he said. “He’s an example of the inept, misinformed zealot who has mismanaged America’s failed policy of marijuana prohibition.”

He continued: “Rosenberg’s claim that more research is necessary is true, but it reeks of hypocrisy because the DEA under his leadership has made badly needed cannabis research difficult, often impossible.”

A groundswell of support for the firing of Chuck Rosenberg has been generated through the efforts of Marijuana Majority, whose petition calling for his removal has earned more than 100,000 signatures delivered to the DEA’s headquarters today. Representative Blumenauer and his colleagues are adding tremendous momentum for the effort to dismiss Rosenberg and to the notion that there should be consequences for government officials, especially those engaged in drug policy, that demonstrate sheer ignorance regarding cannabis.

The Washington Post covered the release of the letter and how this isn’t the first time that Rosenberg stuck his foot in his mouth over marijuana:

Rosenberg’s statements are “indicative of a throwback ideology rooted in a failed War on Drugs,” the letter, spearheaded by Rep. Earl Blumenauer (D.-Or.), begins. “They do not reflect the overwhelming body of testimonial evidence, reforms happening across the country at the state level and in Congress, or the opinion of the American people.”

Rosenberg became the acting administrator of the DEA just six months ago, after public and Congressional outcry over a series of scandals under the leadership of then-Administrator Michele Leonhart. Marijuana advocates had hoped that Rosenberg’s appointment would signal a change in tone at the DEA, particularly on marijuana issues. Instead, Rosenberg’s tenure has become notable for how quickly advocates and lawmakers have soured on his leadership.

I have stated so many times how proud I am of Congressman Blumenauer and how thankful I am that I get to cast my vote for such a tremendous public servant. He has the right position on cannabis and he is very practical and knowledgeable about how politics work and effective ways to increase support for his positions. We wouldn’t be where we are in Oregon, in Congress or in the national debate without the work of Congressman Blumenauer. I don’t necessarily agree with my representative on every single issue, but I know that I can count on him to do his homework and vote his conscious; it helps that his conscious is on the right side of history on the major civil rights and social justice issues of the day. Here’s hoping that President Obama will continue his moves toward sensible drug policy reform and adhere to his promise to place science over politics.

Watch Congressman Earl Blumenauer call for DEA head’s firing on the floor of the House of Representatives: