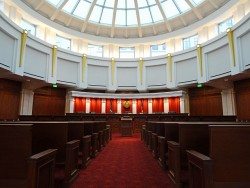 While ending criminal penalties for marijuana is a monumental step in the right direction, employment rights is likely the next step for true equality. Having the freedom to utilize cannabis without fear of prosecution and arrest is only one step in the process when the cannabis community can still be fired, even when the use is medical and had no impact upon their job performance. Colorado’s Supreme Court is expected to release an important decision on Monday. KUSA-TV reports:

Brandon Coats maintains he was improperly fired from his job at Dish Network in 2010 after testing positive for marijuana. Coats, a quadriplegic, worked as a customer service representative for the company for years.

Lower courts have repeatedly ruled in Dish Network’s favor, but last year the Colorado Supreme Court agreed to hear his case. The decision could impact businesses across the state as they continue to employ not only medical marijuana users but recreational users as well.

The lawsuit was filed before the passage of Amendment 64, which legalized the limited use of recreational marijuana for people over the age of 21. Legal observers say Monday’s decision could very well provide some guidance on the recreational side as well.

Here’s hoping that the Colorado Supreme Court will recognize the medical marijuana use of a patient utilizing a safe medicine legally under state law. It is a shame that inactive metabolites that don’t have any effect on one’s job performance can end someone’s career. Once medical use is accepted, then we need to take on adult use as well as it is nonsensical that employees can drink alcohol, a more addictive and deadly drug, but cannot use cannabis. Surely, we don’t want to push employees to use a more dangerous drug, but that is exactly what these antiquated policies do.