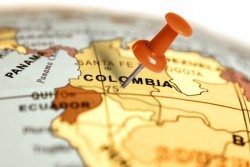 The key drug war country of Colombia is legalizing cannabis for medical use.

Colombia’s history and American drug war involvement and coercion make this a gigantic change. The new Colombian move adds to quickening world wide momentum to remove cannabis from the war on drugs, as country after country rethinks hard line prohibition of cannabis.

The bold move begins with an executive decree by President Juan Manuel Santos. The Colombian leader will soon sign the decree into law, regulating the production and distribution of medical marijuana. Still under the thumb of the USA, Colombian officials were quick to note that this does not legalize growing or selling cannabis.

Small amounts of marijuana (and other drugs) are already decriminalized in Colombia. In a move the US Supreme Court would do well to emulate, the Colombian Constitution Court has decreed that personal use of cannabis and other substances is up the the individual and the “free development of one’s personality.” Contrast this with America’s drug war motto, “Zero Tolerance.” I always thought “Zero Tolerance” was a lousy motto for the United States of America.

The Colombian medical marijuana push comes with the recognition of the huge medical value of cannabis. “It has already been scientifically proven that marijuana has many medicinal attributes”, said President Santos. The condition named in proposed legislation is epilepsy. The efficacy of cannabinoids in cannabis to treat epilepsy is also a major reason for the movement of “marijuana refugees” in the US to legal states such as Colorado where afflicted children can finally receive these anti-seizure effects. And just recently in Mexico, it was the case of a child tormented by epilepsy that caused the Mexican Supreme Court to rule that she (and others) have a right to marijuana medication. Of course, epilepsy is just one of dozens of conditions that medical cannabis can help prevent, treat, and alieve.

Colombia’s actions are just the latest in a tide of sentiments, legislations, decrees, and rulings across Latin America chipping away at the USA-led cannabis prohibition. Chile just harvested Latin America’s first legal medical marijuana crop. Mexico and Argentina have decriminalized small amounts. Uruguay is becoming the first South American country to legalize personal use. Ecuador and Costa Rica are experimenting with decriminalization.

The USA, which led the hemisphere into failed drug war policies, now follows its Latin American neighbors in reducing the many harms of the war on drugs. Colombia’s president has issued a thoughtful and compassionate decree;  too bad American President Barack Obama lacks the will and compassion to do the same.