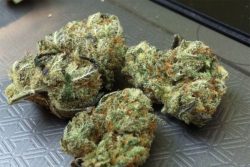 Cannabis legalization is crossing political barriers in 2016 as Libertarian Presidential candidate Gary Johnson announced his support for California Proposition 64, the Adult Use of Marijuana Act , joining the democratic socialist Bernie Sanders, and a whole host of political figures across the political spectrum, including Republican Dana Rohrabacher and Democratic Lt. Governor Gavin Newsom. Johnson announced his support during the Republican Convention, so it flew under the radar a bit. While it shouldn’t be a shock to see Johnson supporting a legalization measure, sometimes libertarians are wary of the taxation and regulatory provisions of legalization efforts. It’s good to see him on board with AUMA.

From The Sacramento Bee:

“Why do I support it?” Johnson, a longtime backer of decriminalizing marijuana, asked about Proposition 64 while leaving Quicken Loans Arena, site of the Republican National Convention. The initiative is supported by Lt. Gov. Gavin Newsom and billionaire entrepreneur Sean Parker.

“Whether you agree with marijuana legalization or not, you have friends, family, coworkers that use marijuana,” the former New Mexico governor said. “Are they criminal? No, they’re not criminal.”

There are many reasons to support ending cannabis prohibition, allowing the issue that cuts across partisan lines. There’s a reason that cannabis legalization measures often garner a higher percentage of the vote than popular national and statewide candidates. In 2012 Colorado’s Amendment 64 garnered more votes than President Obama and Oregon’s Measure 91, earning 56% of the vote in 2014, outperformed popular incumbent Senator Jeff Merkley. Whether you are for personal responsibility, creating jobs, social justice, generating more tax dollars or many other other issues, cannabis legalization is an issue that can bring together the far right, the far left and everyone in between.

This blog was originally posted at WeedNews.co, posted here with special permission.