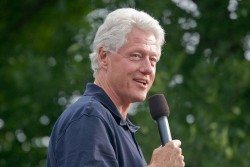 Hillary Clinton will certainly be asked plenty of times about her marijuana policy as she travels the campaign trail. She will most likely be challenged from the left by Bernie Sanders on the Democratic side and potentially from the right by Rand Paul if he can escape the clown car that is the Republican presidential primary.  But it was her husband who made headlines for even mentioning marijuana. From Politico:

At the event discussing agricultural and rural issues, Vilsack called attention to the lack of things that one can plant in urban areas.

“Now with the exception of the state of Colorado and a few other states that legalized another product, there are not many commodities you can plant,” Vilsack said.

Clinton responded: “Dear Lord. That’s all I need. One more story. If only the marijuana growers would invite me to give a speech.”

Bill Clinton, the consummate politician likely knows which way the political winds are blowing, so he could potentially be testing the waters for his wife, seeing if any backlash erupts as he makes comments about marijuana. Maybe the former president was just setting the stage for Ms. Clinton to be true to herself and call for an end to federal cannabis prohibition. A man can dream right?