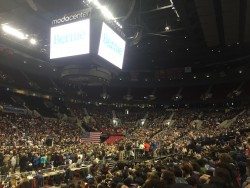 It is safe to say that Portland, Oregon, voters #FeelTheBern as Bernie Sanders packed more than 20,000 of people into the Moda Center once again today. Sanders started his day in Portland, which is the major media market for Vancouver, Washington State’s fourth most populous city, before heading north for other events, culminating in a rally at Safeco Field in Seattle. The anti-establishment Sanders really needs to win Washington’s Saturday caucus by a large margin to shake up the Democratic race, and signs do point to a huge (or even YUGE) victory ahead for the Vermont Senator.

If any city can claim to love the anti-establishment Sanders more than Portland, it is Seatlle, as Washington’s largest city has donated more per capita to Sanders than any other city. Portland actually ranks third, with San Francisco 2nd. Oakland and Washington, D.C., round out the top 5. Of course, the cannabis law reformer in me notices that the top 5 cities all have progressive cannabis cultures (c’mon Denver).

Washington State is the big prize Saturday with 101 delegates at stake. Hawaii, where Sanders got a big boost from Representative Tulsi Gabbard quitting DNC vice-chair to stump for Bernie has 25 delegates up for grabs while Alaska’s caucus will split up 16 delegates. Down by about 300 delegates, Sanders needs to make up a lot of ground this weekend, but the caucus election format and state demographics look very promising for the insurgent candidate.

Nate Silver over at fivethirtyeight.com projected Sanders to carry Washinton 60% to 39% back on March 15th, based upon demographics and primary results at that time. The predictions of the well-respected Silver did occur before the open caucuses in Idaho and Utah, where Sanders garnered nearly 80% of the vote. Silver projected Sanders to get just under 60% in both Idaho and Utah, so nearing 80% isn’t out of the question in Washington State.

If Sanders can come close to his Idaho and Utah performances in Washington, Hawaii and Alaska, he can decrease his delegate deficit by more than 60, even up to 80 if he really dominates the caucuses. The three states voting this weekend all have liberal marijuana laws, so the cannabis community and other progressives have the opportunity to change the narrative of the race significantly if they come out in the big numbers that usually signify a good electoral performance for Bernie Sanders.

Not that Portland could love Bernie Sanders even more, he #PutABirdOnIt, making all Portlandia fans’ hearts flutter and the newest pro-Bernie hashtag, #BirdieSanders: