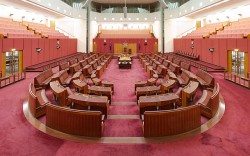 Medical marijuana may soon be legal in Australia, as soon as next month. A group of senators are pushing for parliament to adopt legislation, the Regulator of Medicinal Cannabis Bill, that would create a federal agency tasked with regulating medical marijuana.

This legislative effort has been endorsed by lawmakers of diverse political backgrounds. The Senate committee working on the bill features lawmakers from all major parties, including “the Coalition (the Liberal Party, the National Party, the Northern Territory Country Liberal Party, and Queensland Liberal branch the Liberal National Party), the Labor Party and crossbench senators.” On August 10, these senators will present a report in which they articulate their strong recommendation for the bill’s passage.

While some members of the committee have recognized that the bill is not perfect, the cross-party leadership exercised by the committee is a sign of hope for Australians, whose federal government currently enforces a blanket prohibition on marijuana, including for medical purposes. According to RT, recent polls show that “over two-thirds of Australians support the idea of medical marijuana use and only 9 percent oppose it.” By pushing for federal medical marijuana legislation, the senators in the committee are making it clear that the Australian people have been heard on the issue and that reform is on the way.

Despite its strict marijuana policies, Australia has one of the highest rates of marijuana use in the world. According to government statistics, over one third of Australians aged 22 and older have tried marijuana, and the prevalence of marijuana use is even higher among younger demographics:

Around 750,000 Australians use cannabis every week and approximately 300,000 smoke every day. A steady decline in cannabis use has been reported since the peak in 1998, where 45 per cent of all adult Australians, and approaching 70 per cent of 20-29 years, had ever tried cannabis.

If successful, these reforms would help Australia get started on nationwide marijuana reform. The bill would make it possible for a national medical marijuana industry to emerge in Australia, which would not only provide substantial tax revenue, but also give additional treatment options to sick people in the country. Regulating medical marijuana in Australia would also enable researchers to study the plant’s medical benefits, as well as the effect of different regulations on marijuana markets.

The legislative effort surrounding the bill also has global implications: should parliament follow the Senate committee’s recommendation, Australia would join a growing number of jurisdictions around the world that allow for people to treat their illness using marijuana without fear of arrest, such as Canada, Germany, Israel, and almost half of U.S. states. Considering Australia’s geographical location and its influence on the region, such an outcome would likely encourage neighboring countries to consider reforming their marijuana laws as well.