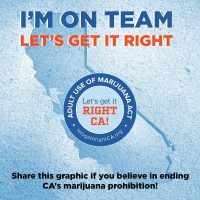 But I part ways with Berger in his comparison of AUMA to Hillary Clinton:

In the same way as it would be a disaster for America to elect Donald Trump, it would likely set legalizing cannabis back two election cycles if California does not legalize this November. Nationally, we have no other viable choice but to elect Hillary. …

Point is, [AUMA] could be better, but, and again like Hillary, it could be far worse.

Hillary Clinton is not like AUMA. Most obviously, AUMA openly supports marijuana legalization, while the best we get out of Clinton is that medical marijuana needs more research, it ought to be moved to Schedule II (where her Big Pharma donors can profit from it), and that states are laboratories of democracy.

I’ve gotten this complaint from some in my audience who know me to be a very progressive guy. How could I support AUMA, this incrementalist corporate approach to legalization, but be opposed to Hillary Clinton, with her centrist corporate approach to governing? If I’m such a #BernieOrBust guy looking for a grassroots revolution against The Man, why didn’t I instead support the grassroots legalization efforts and oppose this one from The Man?

It’s quite simple, really. I support AUMA and oppose Clinton because I’m against the status quo.

Plus, I live in a state (Oregon) that has gone from medical+decrim to legal, and the difference is night and day. Sure, it’s imperfect, especially east of the Cascades, but we’ve created jobs, raised tax revenue, and worked to expunge criminal records.

Supporting Hillary Clinton, however, is a different question. First, despite the threat that she is one of only two “viable” candidates, that’s just not true. Just because we’ve been electing either D or R presidents for 160-odd years doesn’t mean it will always be true. We only elected white male presidents for 200-odd years, remember? The definition of “viable” can change, as Clinton’s presumed nomination proves.

I’m still weighing my options. I’ve met Gary Johnson and seen him on numerous occasions. I find him to be honest and principled in his policy proposals; it’s just that, like Samantha Bee, I only agree with about every other proposal. And, like AUMA, Gary Johnson openly supports marijuana legalization.

Unlike AUMA, voting for president isn’t a binary choice. I’m never going to vote for Donald Trump. But voting for Hillary Clinton means giving my approval to someone who voted for the Iraq War, supported a bloody Honduran coup then opposed taking in the child refugees fleeing it, allowed aid to South Sudan’s army of child soldiers, worked to halve the Haitian minimum wage, resists a national $15 minimum wage in the USA, pushed for Syrian regime change that emboldened Russia, gleefully celebrated the brutal overthrow of Qaddafi that left Libya in chaos, supports Israel’s occupation of Palenstinian territories, promoted fracking worldwide and the Keystone XL pipline domestically, supported labor-busting trade deals like the one that devastated Colombia, crusaded for mass incarceration of “super predators“, approved of the decimation of the social safety net for single welfare mom “deadbeats“, won’t even try for universal health care anymore, gave secret six-figure speeches to Wall Street while leaving State Dept. secrets on an open email server in Chappaqua, opposed gay marriage on the floor of the Senate (when her support would’ve mattered), would accept limitations on abortion, worked to censor video games and ban flag burning and restrict the internet, voted for the PATRIOT ACT (twice), approved of spying on Americans without a warrant, took campaign donations from private prison corps, is working to further militarize NYPD, railed against money in politics while benefiting from the largest super PAC fundraising in history, supports the death penalty, made bankruptcy harder for average people, opposed reinstating restraints on Wall Street gambling with our money, and flip-flops more than a trout on a riverbank.

I know politics is messy. I know we sometimes have to make compromises. And if that list were even half as long, I probably could.

So… Gary Johnson… is he “viable”? Well, he certainly isn’t if everybody buys into the self-fulfilling prophecy that only Republicans and Democrats are “viable”. Only if everybody buys into the lesser-of-two-evils threats and doesn’t it validate my anti-Hillary stand somewhat that even her supporters’ first selling point for her is “Donald Trump would be so much worse”?

This year I think the Libertarian ticket is quite viable. In three-way polls, Johnson is reaching double-digit support. They’ve got the gravitas of having two former Republican governors of Democratic states at a time when Democrats and Republicans dislike their own candidate in record numbers. More people register as Independent now than either Democrat or Republican.

It’s still early, but in this race where the two biggest crowds for presidential candidates rallied behind a crazy-haired white septuagenarian socialist Jew and a crazy-haired orange anthropomorphic YouTube comments section, who knows what could happen?

Clinton is still under an FBI investigation that even without charges filed could damage her support.

Trump will become even more offensive to the point where mainstream Republicans can’t abide him anymore.

As Johnson hits 15 percent and makes it to the debates, his profile rises and more moderate Democrats and sane Republicans support him. In a three-way race, Johnson would only need to top about 40 percent (like Bill Clinton did in 1992) to win. Add Jill Stein siphoning off some more left-wing support from Clinton and this could be the year when a third party finally breaks through to the Oval Office.