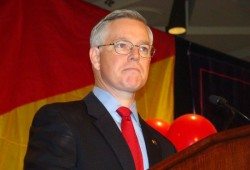 This week I had the good fortune to cover the SW Cannabis Conference and Expo in my first gig with CannabisRadio.com.

Little did I know I’d be walking into a convention center full of murderous criminals who dissolve their enemies in acid, kidnap and behead their sisters, and hang the bodies of police from the overpasses in Scottsdale. [Those links aren’t only Not Safe For Work, they’re not really safe for any compassionate human being with a soul. There is some horror you can never un-see. Consider yourself warned.] 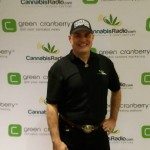 “Why is it any different for marijuana in this regard than if we had cartel members in town for their annual cartel convention?” Montgomery asked.

Well, Bill, you can look at my photos of the “cartel convention” and listen to my interviews with the “cartel members” if you like. Which one of these is most like El Chapo and the Mexican Cartels? 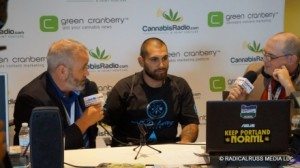 Is it José from the Weed for Warriors project, the grassroots organization fighting for medical marijuana access for our veterans? Because his legs, right arm, and left index finger weren’t hacked off by vicious Mexican drug cartels. He lost those fighting our wars in the Middle East and now needs medical cannabis for the neuropathic pain that plagues him to this day. 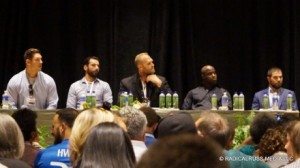 Is it the former NFL players Eben Britton, Nate Jackson, Kyle Turley, and Ricky Williams from the Gridiron Cannabis Coalition, who are fighting for the access to medical marijuana for football players, knowing now that THC is the best medical treatment to reduce the permanent damage from concussion and traumatic brain injury? I mean, the NFL is a cartel, sort of, but they don’t dissolve anybody in acid.

Was it the Utah State Senator, Mark Madsen, who explained his exasperation with conservatives who can’t see the states’ rights, limited government, personal responsibility arguments for medical marijuana? Or Nathaniel, the African-American historian who brought me hemp-paper newspapers from the 18th century and historical documents describing hemp as the “nigger crop”? Or maybe Jessica Crozier, the mom with Harvesting Hope who is trying to make sure kids with epilepsy have access to medical marijuana?

Bill Montgomery went on to explain, according to KTAR News, that there “was no difference between this event and cartels getting together to discuss how to smuggle and refine cocaine and heroin.”

Except that these were companies displaying products that are all perfectly legal in Arizona and most of the United States. People selling soil nutrients, grow lights, insurance, security, web design, software, accounting, and other mundane products and services. Even the few marijuana products, like vapor pens or edibles, are legal for medical marijuana patients in Arizona and they weren’t actually on display.

Bill Montgomery is a dying breed, the rabid reefer mad prohibitionist. Phoenix New-Times reported that Bill had a warning for conference attendees, saying in a press conference, “Some folks who are traveling from out of state and may be engaged in business transactions at the Phoenix Convention Center, you could be violating state and federal law when it comes to trafficking in marijuana. And I can’t confirm or deny whether or not local or federal law enforcement may be on hand in an undercover capacity.”

Since there was no marijuana bought or sold or even displayed at the convention center, I can’t confirm or deny how much Arizona taxpayer money was wasted sending undercover law enforcement in to patrol a trade show floor full of trimming machines, lights, and t-shirts, and a few stages of people talking about cannabis.

But that’s Bill Montgomery for you. If it’s weed, it’s evil, period.

Following the first night of the show, I got to meet a spry older gentleman with a perma-grin on his face who sort of reminded me of Don Ameche from the movie “Cocoon”. “You know,” another person confided, “that’s the ‘enemy of the state’.”

“Who, Don?” I asked, pointing at the happy silver-haired senior.

Yes, that man was Don Ream, a Vietnam veteran and medical marijuana patient who had approached Bill Montgomery at a marijuana debate. Don said he didn’t appreciate Montgomery’s comments that “being a better pothead is not being a better human being” and people like Don are a “drag on this country”.

When Don said he was also a recreational marijuana consumer, Montgomery said, “Well, then you’re violating the law, and I have no respect for you. And I have no respect for someone who would try to claim that you served this country and took an oath to uphold the constitution and defend against all enemies foreign and domestic, because you’re an enemy.”

Phoenix New-Times even gave Montgomery a chance to walk back his “enemy” comments about a brave American serviceman. But Montgomery just doubled down, explaining by email, “Is [Ream] an enemy like ISIS or Al Qaeda? Of course not. But if he or any other vet is going to use their status as a veteran to encourage people to break the law, then that does make them an enemy of our constitution and our laws and that is a sad commentary on where we are at.”

I guess Montgomery never read that part in the First Amendment about freedom of speech and petitioning our government for a redress of grievances.