“Are You Going Be a Parasite or a Social Engineer?” – Day Two at #ReformConf15

First up was Damon Barrett, cofounder and director of the International Center on Human Rights & Drug Policy. He greeted us at first in Gaelic to make a point about human rights being debated not far from us in the nation’s capital. “I saw congresspeople with names like Connolly, Fitzpatrick, and Murphy, passing an act that will stop refugees coming in to this country.” The audience chuckled at the hypocrisy. “One hundred and seventy years ago, Irish people fled famine and repression by the hundreds of thousands and they came here. And as babies are being washed up on the shores of the Mediterranean, I ask if they’ve got no sense of history and no shame?” 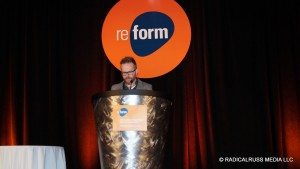 Damon brought the point home to the specific case of drug prohibition endangering human rights. “We have three drugs treaties which enshrine a certain strategy on how to deal with drugs. And what they require states to do is hugely risky from a human rights perspective. So let’s look at why states have to ban private behaviors; have to ban indigenous people from doing what they’ve been doing for millennia; they have to stop religious minorities from pursuing their beliefs; they have to conduct surveillance, arrest people, prosecute them, extradite them; they have to eradicate crops; they have to ban certain forms of expression because of an ill-defined idea of incitement to use drugs.”

The next presenter was Deborah Peterson-Small, the founder and executive director of Break the Chains. “To me it’s really important,” she said, “if this movement is really a movement about elevating people who use drugs, that we have at the forefront people who actually use drugs and are not ashamed to say it.”

She continued with her amazing oratory. “The Western Civilization we are a part of, the Anglo-American enterprise of which the US was the most successful project, was built and financed by promoting addiction for profit – to sugar, tobacco, alcohol. The slave trade was developed in order to support the promotion of addiction for profit.” 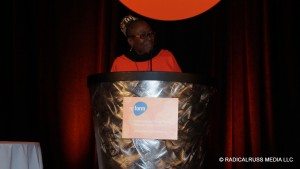 Deborah is a master speaker who kept the applause coming with more great lines. “What is it to be a country that defines itself in terms of [an American] dream – which is by definition not real?” she asked. “So one of the messages I have for you all is like it’s time for us to wake up.”

“It’s a baseball metaphor. Why do you have strikes in baseball; because there is no clock… so the purpose of balls and strikes is to add some level of boundary and finality to an otherwise untimed game. But people are not like baseball, we’re more like football and basketball, because our clock starts running from the moment that we’re born. We are finite people.”

Deborah wound up her talk with a line that only needed a handheld microphone to drop as she walked off stage to be any more powerful. “To all of you pot entrepreneurs out there, my question to you is, are you going to be a parasite or a social engineer? Are you going to use your money to keep sucking the blood out of our [African-American] community, or are you actually going to be a part of the solution of applying reparations. Yes, I said that word because, God damn it, I am done with the idea of people having policies that screw over people for decades and then one day say, ‘oh wow, we’ve become enlightened, my bad,’ and all of a sudden it’s all good. And we’re still left with the scars, we’re still left with the hurt, we’re still left with all of the damage that has been done. You guys owe us and I’m here to collect.” With that, she walked off the stage to a thunderous standing ovation.

There were more speakers, including the Minister of Justice of the nation of Jamaica, Mark Golding, who won the now-rechristened Kurt Schmoke Award, given for excellence in changing drug laws, for his role in ushering in the island’s recent ganja decriminalization laws. I don’t mean to give them the short shrift, but the break-out panels are beginning and I’ve got to run. I will have the audio from all the plenary sessions and a few of the marijuana-related break-out sessions on my Soundcloud page soon.