Andrew Sullivan’s Next Book to Discuss Cannabis and Christianity 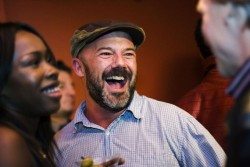 Political-commentating powerhouse Andrew Sullivan is working on a new book on the future of Christianity in which he plans to discuss the role of cannabis in religious practice.

“Cannabis and psilocybin have been really important parts of my own faith life,” he told Marijuana Politics, “People always regard these things as antithetical to religion or to spirituality, whereas of course nothing could be further from the truth.”

Sullivan spoke with Marijuana Politics in February at the International Cannabis Business Conference in San Francisco, where he delivered a speech on marijuana reform.

Openly Catholic, Andrew Sullivan seemed enthusiastic at the prospect of discussing marijuana use in the context of Christian spirituality – but he stressed that this was only a portion of his upcoming book. “That’s a tiny sliver of the book,” he said. “As a believing Christian, I want to reintroduce Jesus to people who have only heard the worst and the most awful descriptions of Christianity.”

Sullivan hopes his book can challenge misconceptions about and within Christianity. “I figured that a gay man like me, who has survived HIV, might be able to get a hearing about what Christianity really needs to be about and what it really is,” he explained.“The current Pope has given us an opening to redescribe Christianity in a more accepting, tolerant, open, and beautiful way. In a way that it has become so divorced from in recent years.”

When it comes to the relationship between cannabis and Christianity, Andrew Sullivan makes the case that they can go hand in hand quite nicely. “My own conscience tells me that when I disappear off to the end of the dunes on Cape Cod in the summer, and I’ve had a little bit of joint, and I sit and I pray and meditate, and observe beauty, that this is an avenue towards understanding God, not a path away,” he says, “and that’s the only thing that should matter for a Christian.”