A New Hope: The Amazing Journey to Free Jeff Mizanskey 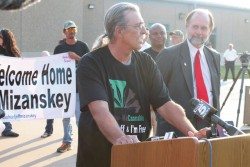 Jeff Mizanskey’s story is simply amazing. It is a story of tragedy, despair, hope, triumph and a new hope for cannabis law reformers. The tragedy of a man spending more than two decades locked in a cage for selling cannabis hurts the soul of everyone with a soul. The despair of a man sentenced to die behind bars for marijuana as a legislative bill designed to free him dies in a state legislature. The hope of freedom after thousands of people urged a Midwestern governor to do the right thing. The triumph of a man, sentenced unjustly, smile the biggest possible smile upon emerging free from prison into the loving arms of family, friends and supporters. The stranger than fiction story then evolves into a new hope for freedom, as a man wrongly caged immediately becomes an advocate to prevent anyone else from suffering the same unjust fate.

The Riverfront Times, one of the first (if not the first) media outlets to publicize Jeff’s case, has a great rundown of the man’s long, strange trip. I recommend that everyone read the entire piece as it really captures the emotion and hard work that went into securing Jeff’s release.

From Jeff’s fight with the prison roaches:

“I put some baby oil in a paper cup and stuck a little piece of food, something sweet, in the middle,” Mizanskey says. “And I placed that cup on a shelf and roaches would go in it, but then got stuck. When it was full, I put them in the toilet. I’d say about three or four hundred roaches a day.”

“I didn’t snitch, so the guys who beat me up knew I was OK, but they still wanted me to do their drug-muling thing,” says Mizanskey. He again declined the invitation — not only did he risk more time in solitary if he was caught, but, at the time, he still figured that he had to somehow have some chance at parole. He couldn’t jeopardize that. (Emphasis mine)

Cruelly sentenced to life in prison, Jeff didn’t want to ruin a potential chance of parole, I can’t say for certain that I would have managed the same hopefulness. How easy it would have been to give into the despair, to wallow in the utter unfairness of his situation. Then Jeff would suffer even more despair when politicians let him down, but then he was granted parole and he finally triumphed, emerging from prison, finally, a free man:

At the front of the crowd was Chris Mizanskey, the inmate’s 37-year-old son, who had become the de facto family spokesman over the past two years. Mizanskey walked through the metal detector, no longer a prisoner, and hugged him. Both men cried as family and supporters applauded. And more family members held their arms open for Mizanskey: his older son Robbie, his brother Mike and many more.

To show the true heart of the man, and the new hope he helps represent for Drug War reformers, Mizanskey immediately talked about the need to end cannabis prohibition and implement prison reform. KMBC.com reported:

He said he plans to focus on issues like prison reform and legalizing marijuana in Missouri.

“We’ve got a lot of work to do to get this legalized. Nobody deserves to be in there for marijuana,” he said. “I’ll be going around talking to a lot of people. I don’t know if I’ll always be politically correct, but I know that it’ll be coming from my heart.”

He said there’s a lot of people in prison serving long sentences for what he feels are lesser crimes, while he sees child molesters get released.

After 15 years in the Drug War reform movement, I have certainly learned to appreciate victories of all sizes and important events that can help us convey the harms prohibition has brought upon good, nonviolent people. Even from afar in Oregon, I haven’t appreciated any victory any greater than the release of Jeff Mizanskey in my birth state of Missouri, it ranks right along with electoral victories that legalized cannabis in states across our nation. Jeff’s case personifies the failure of the War on Drugs and I am confident that his story will help us educate average voters about the need to legalize and regulate cannabis across the country.

My sincere thanks to Jeff’s family, his attorney Dan Viets, Show-Me Cannabis and everyone that worked for his release. With this type of dedication, along with our movement’s momentum, hopefully the Show-Me State will continue showing the rest of the country that regulating marijuana is a much better policy than prohibition by legalizing marijuana as soon as 2016.

Jeff’s family has set up a GoFundMe page, overseen by his lawyer Dan Viets, to ensure that every dollar goes to Jeff. Please consider a donation. Every dollar makes a difference.