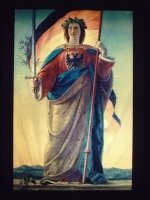 It sure looks like Germania, an important icon of Germany, is holding cannabis in this painting by Veit from 1848.  As a concept, Germania is defined in Wikipedia as,

The personification of the German nation or the Germans as a whole, most commonly associated with the Romantic Era and the Revolutions of 1848, though the figure was later used by Imperial Germany.

Germania is also the Roman name for German lands, occupied by Rome for centuries.

In this iconic painting by German Romantic painter Philipp Veit (13 February 1793 – 18 December 1877), Germania as this personification certainly appears to be holding hemp, carrying cannabis. Does she not? Click here for a closer view.

Somewhat disappointingly the Wikipedia entry for Germania omits any mention of cannabis or hemp. However, in his book, Marijuana Medicine, German anthropologist and ethnopharmacologist  Christian Rätsch captioned the Veit painting:

Germania, the personified spirit of the 1848 German Revolution, holds a hemp branch, a symbol of peace and liberation, in her right hand. (German oil painting by Philipp Veit, 1848)

Luckily, if Germania were caught today by the German police carrying cannabis, quite likely it would be legal, as of only January 2017. For in that month, the German parliament took the historical step of legalizing medical cannabis in Germany. If unaffordable, the medical cannabis will be paid by government health insurance. The downside is that use will be limited to a few medical conditions and patients will not be allowed to grow their own cannabis. Look for both these limitations to wane in the coming years.

As reported in BMJ, “Germany’s Federal Institute for Drugs and Medical Devices, known by the acronym BfArM, is creating an agency to oversee the cultivation of marijuana and the subsequent production of cannabis to be used medicinally.”

To be part of Germany’s (and Europe’s) cannabis transformation, join the International Cannabis Business Conference (ICBC) April 10-12 2017 in Berlin.