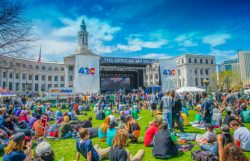 DENVER, Colorado – A new economic report shows that since marijuana legalization, Colorado’s economy is booming. The Colorado Business Review report, released Thursday by the University of Colorado Leeds School of Business, shows that employment, housing, and income indicators in Colorado are meeting or exceeding national averages. Patty Silverstein, president and chief economist at Development Research Partners in Jefferson County, told The Cannabist that in 2014, the first year of legalization, there was “a 3.5 percent increase… [and in] 2015, a 4.9 percent increase in food-manufacturing employment,” likely attributable to edibles. Chemical manufacturing employment, where extracts would be classified, increased 1.4 percent in 2014 and 3.9 percent in 2015. Colorado’s GDP increased 3.6 percent overall and the state added 62,000 in the twelve-month period through last May.

BOSTON, Massachusetts – The Campaign to Regulate Marijuana Like Alcohol is filing an ethics complaint against a police officer who campaigned against their initiative while on the clock. Jim Borgehansi, spokesman for the pro-marijuana campaign, said the campaign alleges that John Carmichael Jr., the police chief of Walpole, appeared an anti-marijuana legalization event during working hours in his uniform on June 23. The event was sponsored by The Safe and Healthy Massachusetts Campaign, the group campaigning against the legalization initiative. Carmichael denies any impropriety in his actions, stating to MassLive.com, “As a public safety official I have a responsibility to the community to educate them about the dangers [of marijuana].” The marijuana campaign originally filed the complaint with state elections officials, who then referred it to the ethics commission.

SANTA ANA, California – The Adult Use of Marijuana Act has added another $2 million to its campaign coffers this week. The legalization proposal, now dubbed Prop 64, received another $1.25 million from its primary benefactor, former Facebook president Sean Parker, on top of the first million he already donated. The New Approach PAC, a committee controlling the philanthropic donations from the estate of the late Peter Lewis, has contributed another $750,000, doubling their commitment to California legalization. The campaign is expected to raise a total of $10 to $20 million dollars. In comparison, the campaign opposing the measure favored by 60 percent of Californians, has raised just a scant $131,000.

SANTA ANA, California – The police officers caught on hidden camera allegedly abusing a disabled woman and eating marijuana-infused products have been fired by the Santa Ana Police Department. A spokesperson confirmed officers Brandon Matthew Sontag, Nicole Lynn Quijas, and Jorge Arroyo are no longer employed by SAPD. The former officers have pleaded “not guilty” to charges of vandalism and petty theft that arose from their May 2015 raid on the Sky High Holistic marijuana dispensary in Santa Ana. The officers were never drug tested and face six months to a year in prison if convicted.

PORTLAND, Oregon – The City of Portland has signed off on a public event allowing the distribution of free marijuana samples. The Oregon Cannabis Association is putting on The Summer Fair, an event that will feature dozens of Oregon cannabis cultivators, will be held July 24 at the North Warehouse in Portland. The city has cracked down on paid-admission events where marijuana samples are given out, contending that having to buy a ticket to get into a building for a free sample amounts to selling marijuana, which is only legal in a pot shop. OCA has gotten around that limitation by making The Summer Fair a free event. Compliance officers will likely show at the event to ensure no marijuana smoking or vaping is taking place indoors contrary to the Clean Air Act. Violations could cost the fair organizers and/or the building landlords $5,000 in fines.