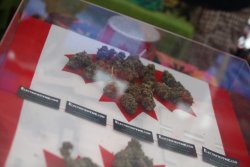 New information last week from GMP Securities, an independent investment dealer based in Toronto, is leading analysts in Canada to suggest that the adult-use legalization market in the Great White North will be even greater than previously suggested. The new estimations also indicate that production will finally outpace consumption around 2020, leading to lower prices for the consumer.

Martin Landry, a research analyst from GMP Securities, gave his thoughts on the emerging market in a report to his clients, as reported by CanTechLetter.com:

“‘We are revising upward our market size estimate for the Canadian recreational cannabis market,’ the analyst says. ‘This revision stems from the probable addition of cannabis edibles and concentrates to the list of products legally available on July 1, 2018 and also from recent data emanating from the US which suggests our previous forecasts were too conservative. ‘We are also changing our assumption on the timing of implementation of legalization to July 1, 2018 vs our previous estimate of January 1, 2019.’

“Landry says he expects edibles could comprise a total of forty per cent of all cannabis cosumed in Canada, noting that this is the mix in Colorado since 2016. He says the HESA amendment to Bill C-45 that ensures the availability of edible and concentrated forms of cannabis was the other development that changed his estimate on edibles from 30 per cent of the total market to 40.

“Landry believes recreational market demand will reach 500 tons in 2021, 600 tons the following year and 700 tons in 2023. But the analyst believes a potential oversupply condition could emerge after 2020, due to several large industry capacity expansions and greater production efficiencies from LPS. Because of this, the analyst has dropped his estimate for the price of dried cannabis from $5.00 per gram to $4.00.”

I expect revisions for market estimates will continuously be revised between now and 2020, but I’m looking forward to that market drop. In the meantime, there’s still a lot of room for growth in the production and sales sectors in Canada, so be sure to pay attention!

Stay tuned in to the International Cannabis Business Conference for all your current and future cannabis industry questions! Our next event is on the beautiful island of Kauai, Hawaii on December 1-3. Then we’ll be hitting San Francisco in February, Berlin in April, and finally back round to Vancouver, Canada on June 24-25, 2018. Get your tickets today, and we will plan to see you there!

This blog was previously published first by the International Cannabis Business Conference. It has been posted here with special permission.