Oregon Leads the Way on Camping with Cannabis 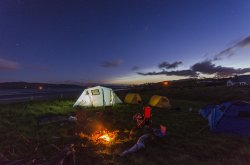 Oregon seems to have a knack with firsts in the evolving global marijuana market. Now, an entrepreneur in eastern Oregon appears to be leading the way on merging outdoor recreation with recreational cannabis.

Private landowner and established cannabis entrepreneur Wayne Zallen has been involved in the cannabis market in Oregon since 2014, and may now be the first in the country to open a cannabis-friendly campground for pleasure-seekers headed to the eastern part of the Beaver State. Allen recently acquired a 5-acre property, formerly known as Lake Selmac Resort, and re-dubbed the place “Smoke on the Water Lake Selmac”.

According to the USA Today affiliate, The Statesman Journal:

“(Zallen) envisions his campers lighting up in their RV or tent sites, or inside a 20-by-40-foot ‘community center’ on the property. He also plans a stage for concerts and other events, and custom tepees, massages, and yoga.”

There are still some hurdles to entry, but with private property-rights protections under current Oregon law, Zallen may be embarking on a first-of-its kind enterprise, which is quite likely to be imitated throughout the country as more lenient, adult-use cannabis laws become the norm. So far, stakeholders from the lake’s region seem willing to approach the possibility of a cannabis campground with an open mind:

“A lease of a strip of county-owned land for the docks and boathouse would need approval. The Josephine County Board of Commissioners and the Parks Department appear to be on board. Commissioners heard discussions, and approval of Zallen’s lease will be on the agenda at a public meeting soon. The lease would bring in $5,400 in six years….

“’If they manage this property they could probably do very well,’ Parks Manager Sarah Wright said. ‘I’m a little concerned about how this may affect our campgrounds, but he’s working with me.’”

One thing is for certain, the emerging cannabis industry in Oregon is brimming with ideas and great opportunities. While there will be setbacks, and hard work and perseverance will be required, the future of the marijuana industry in the Beaver State looks to be bright.

The Oregon Marijuana Business Conference (OMBC) on April 28th in Eugene presents a golden opportunity for those in the cannabis industry, and for those who are thinking of joining, to learn the latest about new rules and regulations, ask burning questions of licensed attorneys, and network with other members of the cannabis business community. Be sure to get your tickets by April 26th, and save money with Early Bird Ticket prices! Become a part of the Oregon cannabis industry which is leading the way on national politics, and be sure to see OMBC keynote speaker Henry Rollins. The OMBC is the must-attend event for the Oregon cannabis community, so get your tickets today!