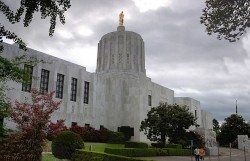 Senate Bill 844-6 Amendments does the same: limits medical marijuana production capacity in residential areas to 2 patients (12 plants) per site and in non-residential areas to 8 patients (48 plants per site). While the intent of the legislators on the Measure 91 Committee is to minimize black market diversion, the real consequence will be higher prices for patients, lack of adequate supply for the nascent dispensary market, and a dramatic reduction in genetic diversity among botanicals that are supposed to help the sick.

When production targets are reduced, prices rise. The current Oregon Health Authority administered dispensary program and marketplace is reliant upon the “excess” production of cannabis or derivative products to be “transferred” into medical marijuana “facilities.” Curtail the excess, curtail the available inventory for dispensary shelves. Limit gardens to a dozen (or few dozen) plants, and a consistently diverse supply of fresh cannabis buds shall noticeably diminish. Experimentation with unique plant cultivars (phenotypes) that have uniquely special and yet to be discovered medicinal properties (chemotypes) will become non-existent.

Patient limits at grow sites erode efficiencies in modes of production. Such economic policy is more commonly found in planned socialist and communist countries. Never has Oregon looked so undemocratic: voters passed Measure 91 last fall because they want liberalized cannabis reform. They wanted state oversight of the legal adult-use cannabis market and they specifically wanted the medical program to be left intact. The joint legislative committee seems to have its priorities turned around. Instead of regulating the Measure 91 system, it has set its sight on implementing unnecessary rules and regulations for the Oregon Medical Marijuana Program (OMMP). Garden size reductions and plant count limits throw the will of the voters back over the Berlin Wall into draconian Eastern European centrally planned economic production quotas.

Like OHA licensed dispensaries, growers can also be subjected to reporting and monitoring. Limiting patients and plants at grow sites is anathema to free market economics, turns the democratic process upside down and introduces inefficiencies into the entire supply chain. It rewards growers who are lucky enough to have large land plots and large gardens — the current grower aristocracy — and it stifles competition from new farmers who may finally be willing to cultivate cannabis for dispensaries under a newly legal framework.