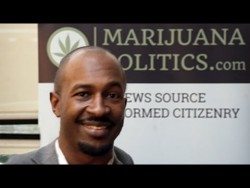 The “Green Rush” is booming.  As marijuana prohibition falls by the wayside, many “legitimate” entrepreneurs are looking to get into the cannabis industry. The funny thing is, most of them are white.  That’s not necessarily a bad thing, but let’s remember that 61 percent of the people in jail or prison for non-violent drug offenses are Black or Hispanic. So while it is great that this industry is booming, it’s not so great that many of the people most affected by cannabis prohibition are not getting a chance to take advantage of the opportunities of cannabis legalization.

The Minority Cannabis Industry Association is looking to change that.  Their goal is to create more opportunities for people of color in the cannabis industry. I had a chance to talk to MCIA Vice President Jesce Horton at the 2015 Oregon Medical Marijuana Business Conference.  Take a look. Leave a comment. Get Involved.